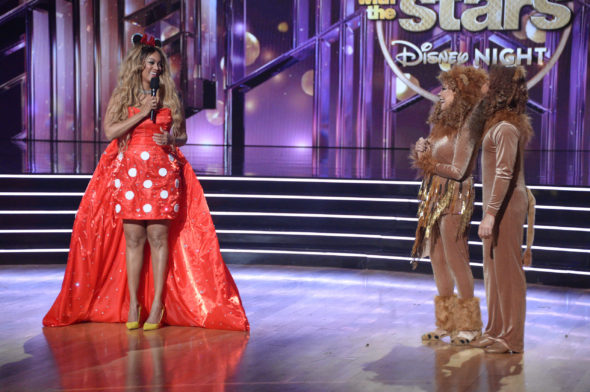 Dancing with the Stars went made some big changes ahead of its new season, and many fans were unhappy to see Tom Bergeron and Erin Andrews fired as hosts of the ABC series. Tyra Banks is now hosting the dance competition series, and some are not happy with that choice either.

DWTS executive producer Andrew Llinares recently spoke about the reasons for the changes at an ABC press event. He said the following about the firing of Bergeron and Andrews, per The Sun:

Llinares says that he is pleased with how things have worked out and thinks that bringing in Banks to host the series has “changed the rhythm of the show in a really exciting way. I think Tyra is doing an amazing, amazing job. It’s been wonderful having her energy in the ballroom and her expertise as a host in the ballroom. She’s brought a new life to everything.”

The changes did appear to cause a drop in viewership in its second week on the air this season, but it bounced back some in week three. Dancing with the Stars currently airs on Monday nights on ABC.

What do you think? Were you surprised by the firing of Bergeron and Andrews? Have you been watching Banks host Dancing with the Stars on ABC? Will you continue to watch season 29?

Tyra Banks is nauseating. I’ve never missed a show since Season 1, so even though I was mad about Tom & Erin, I tried watching because of Derek Hough being a judge……but couldn’t stand Tyra Banks so I just turned it off after the 3rd show and will not watch it again while that disgusting Tyra is on. The whole feeling of closeness and family is gone…..as long as Tyra Banks is the host, I WILL NOT WATCH it again.

I don’t watch the show anymore.

I have no problem with Tyra but I liked Tom. You don’t get rid of the main man!!! I have watched this show since the first episode. I never missed it. Sorry not watching anymore.

Tyra really sucks as the host, also dressing the judges in stupid outfits ! sucks as well. Can’t take it any longer . Ruined an enjoyable show to watch. Done !!

Tyra Banks is horrible. Bring back Tom & Erin. Stopped watching because of the change!

I Wish Erin & Tom we’re still the hosts. I don’t think Tyra is a good mix for this show. It’s only about fashion for her

Why fix Something when it’s not broken.
I LOVED Dancing with the Stars. I thought Tom and Erin brought fun & excitement. I still watch it but not live, I tape it so I can fast forward Tara, Didn’t like her on AGT
And don’t like her on DWS. Bring back Tom!!!!

Agree will not be watching as long as Tara is MC.

Sometimes, new is good, not in case.
So I have made my decision to not watch!

Disagree vehemently about the decision to fire Tom and Erin. Banks has no talent as a host — was unimpressed with her on AGT as well. Please get a new host ASAP — or better yet bring back Tom & Erin. I am still watching the show as I love the dancing, costumes and getting to know a different dimension to the celebrities — when Banks is on I just look away and hit the mute button! If you’re hell-bent on making some changes, how about starting with the judges? Carrie Ann is a drama queen and Bruno is —… Read more »

Not happy with the change at all! Tom and Erin added class to the show. I don’t care for Tyras comments and her apparel is hideous!!! Wasn’t going to watch this year, but love Derrick Huff. Probably won’t watch another season, which is sad I have been a fan since season 1

It was a horrible decision firing Tom & Erin… like the old saying goes “If it isn’t broken, don’t fix it”. I am very disappointed with this new season and without Tom & Erin, I doubt I will continue watching Dancing w/the Stars.