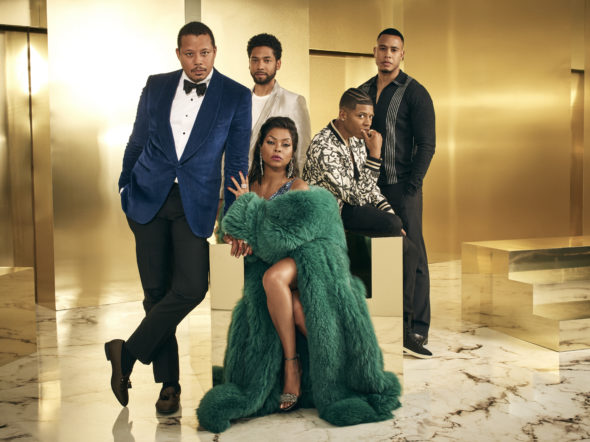 Will Lucious fully recover and keep the Lyon family on track? Has the Empire TV show been cancelled or renewed for a fifth season on FOX? The television vulture is watching for the latest cancellation and renewal news, so this page is the place to track the status of Empire, season five. Bookmark it or subscribe for the latest updates. Remember, the television vulture is watching your shows. Are you?

In Empire, season four, Empire Entertainment celebrates its 20th anniversary, and Lucious (Howard) makes his first public appearance since the Las Vegas explosion. Of course, the Lyons each have their own concerns regarding his recovery, as does his nurse, Claudia (Moore). Meanwhile, Cookie (Henson) reflects on her 17-year prison stint. In order to preserve their family legacy and business, everyone must take a hard look at their past and present choices.

The fourth season of Empire is averaging a 1.84 rating in the 18-49 demographic and 5.66 million viewers. Compared to season three, that’s down by 33% and down by 26%, respectively. Find out how Empire stacks up against the other FOX TV shows.

Though the ratings are down, Empire remains FOX’s top show. I’m sure it will land a fifth season renewal. For now, I’ll keep a hungry eye on the Nielsens, and update this page with breaking developments. Subscribe for free updates on any Empire cancellation and renewal news.


What do you think? Did you think the Empire TV show would be cancelled or renewed for season five? How many seasons do you expect this FOX TV series to run?

Way too much (in your face) gay scenes. Most Viewers are not comfortable with seeing that. Instead of cutting back oon those Gay making out scenes, Lee Daniels doubled down and tripled down on them. So, viewers fled. It’s just that simple.

Just heard the news. Please reconsider your decision to cancel, I love this show. There are not many shows to watch with all the reality shows on air. This show has substance along with excitement.
Therefore please rethink your decision.

I am very upset about the Jesse Smollett out come. I sincerely hope that he is not brought back. Average people who try to have integrity see things like this and the college acceptance scandal and feel the deck is stacked against them on all fronts. This also demeans people who need protected from “hate crimes” .

I really can’t watch this without Jussie I will have to let this one go love the mom and dad but Jussie is the key for me.

I thought it should never end.So much excitement in each episode.
Still waiting patiently for the return.

Very confused…CAN U PLEASE LET ME KNOW WHEN THE NEXT NEWEST EMPIRE WILL BE SHOWING?

OMG I love this show please we MORE . At least 10 seasons.

Samee love it so much girll