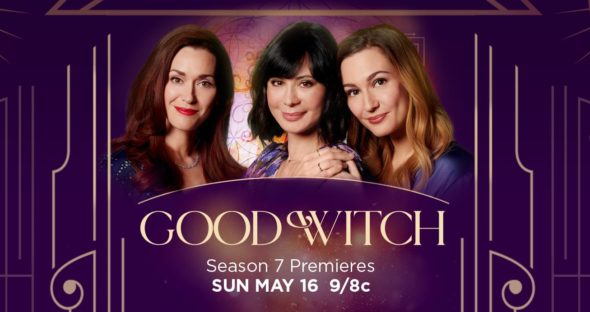 How long will the magic last? Cassie and the other Middleton residents have been on the air since 2008 (if you count the Good Witch movies). Will this fantasy comedy-drama series continue to enchant enough viewers to keep the show on the air? Will Good Witch be cancelled or renewed for season eight? Stay tuned. *Status Update Below.

The Good Witch TV show stars Catherine Bell, James Denton, Sarah Power, Catherine Disher, Kylee Evans, Katherine Barrell, Marc Bendavid, and Scott Cavalheiro. Set in the town of Middleton, the show follows Cassandra “Cassie” Nightingale (Bell). She’s the owner of a shop called Bell, Book & Candle, and is recently married to Dr. Sam Radford (Denton). Like her daughter Grace, Cassie has the gift of enchanted insight and magical intuition. The velvet pouches of soil discovered by Cassie, Abigail (Power), and Joy (Barrell) at the end of season six mark the start of a new Merriwick mystery for the cousins to unravel. This leads them to reflect on their pasts and how certain life events have impacted who they are now. Alongside the usual Middleton fun, season seven promises new relationships, personal challenges, and romance.

For comparisons: Season six of Good Witch on Hallmark Channel averaged a 0.17 rating in the 18-49 demographic and 1.87 million viewers.

What do you think? Do you like the Good Witch TV series on Hallmark Channel? Should it be cancelled or renewed for a eighth season?

*7/10/21 update: Good Witch has been cancelled by Hallmark Channel.

i have been watching this show since the beginning , all the movies and six seasons , its a GREAT family friendly show that both men and women can enjoy as well as kids, the characters are fun, interesting and relatable. its nice to have a show you can watch and escape reality for an hour ,instead of the normal procedural’s ,and useless “reality / competition /singing / dancing, etc” garbage . to see the show and characters grow and stories within stories is entertaining, and we look forward to it every season…please keep this show on for 2-3 more… Read more »

My mother and I like good which show very much.my name is sudha.

Do not cancel this show. Love it. Have been watching since the very first movie aired in 2008. Look forward to this show and the Halloween movie every year. Please do not cancel.

People have just been allowed outside their house for the first time in a year and a half without a mask, I really think that’s the reason for poor ratings right now. I couldn’t wait for it to come back on, And I’m sure when people settle down and realize it’s back on they will watch it.

Love The Good Witch I just don’t get the Hallmark channel.

I love the Good Witch program..please keep it going and don’t cancel it.

I am 25 years old men love Christmas hallmark movies are the best only thing I watch. No judgment people like everything.

I absolutely love this show and look forward to watching it every year.

Could you explain the ratings numbers as they have no meaning for me as stated.

We are 64 and 70. We love and look forward to watching the Good Witch. Please continue the show.

My husband and I love the Good Witch