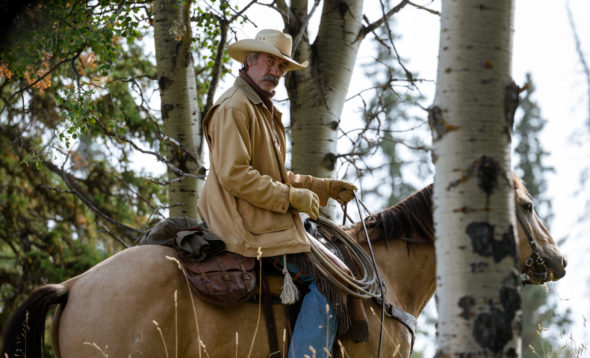 The longest-running Canadian scripted drama is going to keep running. The Heartland family drama has been renewed for a 15th season on CBC. The 10 episodes will begin airing on Sunday, October 17th in Canada. Season 15 has yet to be officially picked up by a U.S. outlet and many viewers are still waiting to watch season 14.

The Heartland series is based on the bestselling series of books by Lauren Brooke and the cast includes Amber Marshall, Michelle Morgan, Shaun Johnston, Alisha Newton, Chris Potter, Kerry James, Nathaniel Arcand, and Jessica Steen. It’s a multi-generational saga that’s set on the Heartland ranch in the rolling foothills of Alberta, Canada. It follows Amy Fleming (Marshall), her older sister Lou (Morgan), and their Grandfather Jack (Johnston). Together, they confront the challenges of running the ranch that has been in their family for generations.

The 14th season of Heartland finished airing in March on CBC in Canada. In the United States, the UP Faith and Family streaming service is currently releasing season 14 episodes on Thursdays and also offers the preceding 13 seasons.

At some point, it’s expected that the UPtv cable channel will air the 14th season as well. Season 13 started streaming on UP Faith and Family in February 2020 and those episodes began airing on UPtv in June 2020.

In the States, Netflix also streams the Heartland series but typically releases the newest season much later.  Seasons 12 and 13 just came to Netflix in February 2021.

Check out our status sheets to track new TV series pickups, renewals, and cancellations. You can find lists of cancelled shows here.
What do you think? Do you enjoy the Heartland TV series? Are you glad to hear that it’s been renewed for a 15th season?

Heartland is my favorite show of all times and I’m 60. The moral structure and the family values that are depicted are very rare in the world of television today. I would be crushed if I could no longer watch it… it brings HOPE to an otherwise confusing and messed up world. The characters are believable. My only complaint is that I can not watch season 15 on up tv through dish network and they made us believe that it was coming soon. They have advertised it but not delivered. I don’t like being teased about anything. I want to… Read more »

Do not cancel Heartland!!!!!!!!!!! I love this show Netflix does a better job than any other network. Just so you know.

I have watched all previous seasons and loved the show. Season 15 appears to have a new director due to the observed quality. There are more closeups in episode 1 than all other years combined, the sound is hollow and does not meet the standards you set. Too much is filmed 8n the dark and the music is different, not better but different. I do hope that the next episode is an improvement. You had a great hang going.

I think Heartland touches many hearts around the world, It’s an ongong show that has hit me at home as I have binged on season 1 to 14. Wishing TY didn’t take another route but that’s life. This show describes how life really happens on a horse ranch which makes the show very believable to the audience. I do think as I speak for 100,000’s of people that are loving this show as it should go to 25 years or more!!! Facebook comments of this show are off the charts for loving this series of great and outstanding actors and… Read more »

I love heartland. Before I was able to watch season 14 i lost my husband to cancer and was having a really hard time. Even though it’s a TV show i related to Amy’s loss of Ty and in alot of ways it helped me. I can’t wait for season 15 to come out