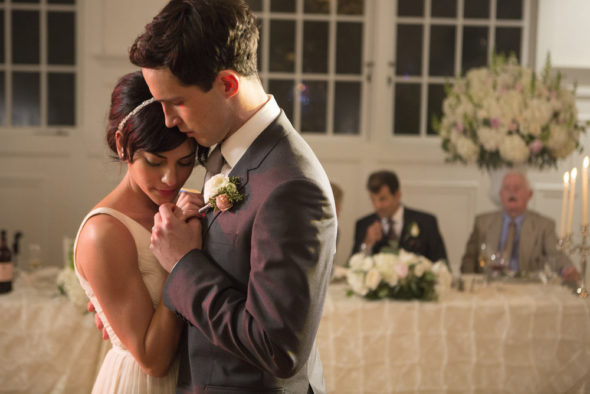 Will Ezra, Richard, and Jules ever track down Maddie? Has the Imposters TV show been cancelled or renewed for a second season on Bravo? The television vulture is watching for the latest cancellation and renewal news, so this page is the place to track the status of Imposters season two. Bookmark it, or subscribe for the latest updates. Remember, the television vulture is watching your shows. Are you?

A black comedy airing on the Bravo cable channel, Imposters stars Inbar Lavi as a persona-shifting con artist. The series also stars Rob Heaps, Parker Young, Marianne Rendón, Stephen Bishop, Brian Benben, and Katherine LaNasa. Uma Thurman recurs. In the story, Maddie (Lavi) robs her targets of everything, including their hearts.Things get complicated when three of Maddie’s former targets — Ezra (Heaps), Richard (Young) and Jules (Rendón) — team up to track her down. Meanwhile, Maddie meets a potential love interest, Patrick (Stephen Bishop), while pursuing her next mark. The possibility of romance threatens to derail her assignment, much to the chagrin of her mysterious boss, The Doctor.

The ratings for Imposters have been pretty consistent and it’s Bravo’s best-rated scripted show. I believe it will be renewed for season two.

4/18 Update: Imposters has been renewed for season two on Bravo. Details here.

What do you think? Are you glad the Imposters TV show was renewed for season two? How would you feel, had Bravo cancelled this TV show, instead?

One of the most original story lines to come along in an extremely long time! I am praying it doesn’t get cancelled, that would be a real tragedy. If anyone from Bravo checks out the comments please please renew! Cast is awesome

One of the best series ever! Please renew for season 2!

One of the most enjoyable shows I have watched in a very long time. Great character development and mixture of comedy and drama. I will be very disappointed if it isn’t renewed for a season 2.

Love this show! Hoping it gets renewed…..

Like the scenery,the plot twists and turns plus the cast. My wife often knows what will happen next. Only TV show she likes. Please renew!

This show is wonderful. I hope they don’t cancel it.

One of BraVO’S BEST SHOWS YET! Please renew.

Love this show, hope there will be a season 2

Yes… Please let there be a season 2.

Love Imposters! One of the most captivating and innovative shows in years! Please renew!!!!

Please renew. So unpredictable!!!! Never see it coming. Love it.