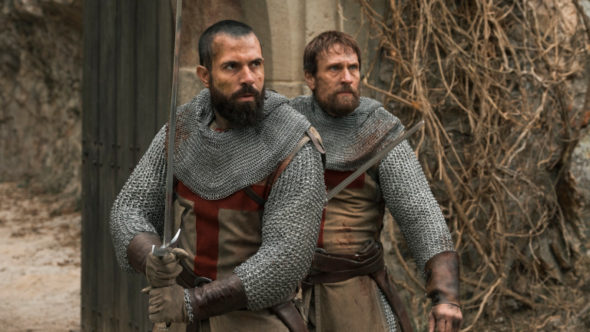 Too sad. Was historically not too accurate but very entertaining. I would watch it if renewed.

Knightfall is a wonderful show. My husband and I were looking forward to Season3. Very disappointed.

Yet again another good show bites the dust.. but im sure its vacant airtime will be filled with something we all need to see such as more rehashed programs of old rehashed programs compiled from film which should have been left on the cutting room floor.

Why do they always cancel these good shows it’s very disappointing to see this is gone . I’m fed up with networks canceling good shows to put on those highly stupid and ridiculous realaty shoes they are a watts of time

I really enjoyed watching this show and learning about the Knights Templar. It always seems like the good shows get canceled

Loved the show. 68 year old female. So sorry to hear this

Please, please, please don’t cancel Knightfall. There are so few shows like this and it’s fascinating. Been looking forward to Season 3. I’m not in your demographic, but at 72 there are few excellent shows to pick from, and Knightfall was one of the best!! I watch this with my 36 year old daughter, and trust me it does have an excellent following. PLEASE KEEP IT ON THE AIR!!

Damn shame and too shortsighted. Vikings was slow to pick-up and look what it became. There is a thirst for this type of historical drama and networks should embrace the commitment to see projects like this through to the end. During this COVID lockdown period, programmes like “Knightfall” could easily gain greater audience with a little promotion. One thing for sure, Netflix would not let a series like this die so quickly!! Once “Vikings finishes, not much reason to subscribe to “History Network“ anymore!

This is very disappointing. I loved Knightfall and my husband liked it as well. The primary Templar actor was great! I think the murder of his lover the queen during season 1 largely accounts for the drop off in viewers of season 2. Sad to know there won’t be any more episodes.

Sad. Loved that series. Way better than most on history channel. How many Adolf Hitler shows do you have to have?

So sorry to hear this. I really enjoyed this show

This is stupid, how many shows are airing by History that they wanted to cancel this?!