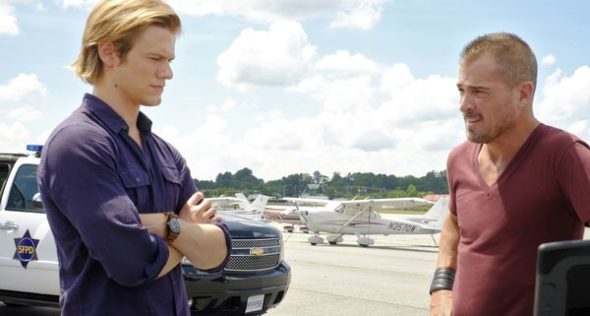 TV show description:
A reimagining of the classic television series from the 1980s, this action-adventure drama centers around a twenty-something problem-solving adventurer.

Angus “Mac” MacGyver (Lucas Till) creates a clandestine organization within the United States government where he uses his extraordinary talent for unconventional problem solving and vast scientific knowledge to save lives.

MacGyver’s team of experts join him on high-risk missions around the globe. They include maverick former CIA agent Jack Dalton (George Eads); Patricia Thornton (Sandrine Holt), an ex-field agent turned director of operations; and Riley Davis (Tristin Mays), an unpredictable computer hacker with a chip on her shoulder. At home, MacGyver is entertained by his ambitious roommate, Wilt Bozer (Justin Hires).

Under the aegis of the Department of External Services, MacGyver takes on the responsibility of saving the world, armed to the teeth with resourcefulness and little more than bubble gum and a paper clip.

What do you think? Do you like the MacGyver TV show? Do you think it should be cancelled or renewed for another season?

My absolute favorite TV shows of all time are; Macgyver, Bull, and, NCIS with Mark Harmon.
I prefer the new Macgyver show over the 80’s one. And Bull is Bull, ya gotta love him. The Original NCIS is best. I won’t watch those wanna be’s, ncis la and new orleans.
The really big question here is WHEN ARE YOU GOING TO PUT MACGYVER BACK ON?

I love McGyver my dad and I watched the old ones faithfully and now we watch them faithfully . We have always loved this show it has been a great bonding experience for both of us

LOVE the show. I really enjoy each character. Each have their own personality.

Pleeeeeeeaaaaasssseeee!!! Dont cancel macgyver. Love the show and the actors. Its funny and clean. My 11 year watches it with me and my husband and we all love it. Great show!!

George Eads is an even bigger bonehead here than he was on CSI. While the original MacGyver suspended the laws of physics and chemistry sometimes for the sake of the plot, this show doesn’t even try. I blame the writers. The cast just isn’t being given enough to work with. Bring back the Swiss Army Knife…

Love the show don’t stop it. It is amazing and fascinating.

Love it keep it going

Love this show, enjoyed the old series but new one adds new twist!!! Please continue to keep me entertained!!!

Best American series for sometime got everything comedy, stunts,even a very beautiful computer hacker so here,s hoping for series 3 to continue in this vain