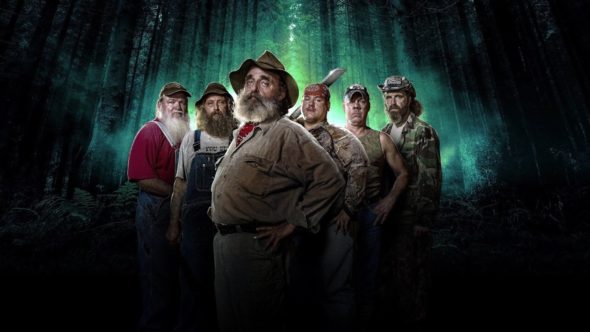 Mountain Monsters is returning soon for its sixth season. The upcoming season will air on both Travel Channel and Discovery+ starting in January. Viewers will see 10 new episodes featuring the Appalachian Investigations of Mysterious Sightings team as they track Bigfoot and more.

Travel Channel revealed more about the upcoming season of Mountain Monsters in a press release.

“It’s Bigfoot or bust for the Appalachian Investigations of Mysterious Sightings team (AIMS) as they head back to the Tygart Valley in West Virginia. The surviving members, Willy McQuillian, Jeff Headlee, Joseph “Huckleberry” Lott, Jacob “Buck” Lowe and William “Wild Bill” Neff, are on a mission to go after a massive Sasquatch that they know roams these hidden hills. Season Six of the cult-classic series, MOUNTAIN MONSTERS, returns with 10 new one-hour episodes beginning on Sunday, January 2 on Travel Channel at 10 p.m. ET/PT on Travel Channel and begins streaming the same day on Discovery+.

Before setting off, the AIMS team are given an old shoeshine box that belonged to their beloved late team leader, Trapper. While they are unsure of what the contents of the box mean, they know there must be more to it after finding an old picture of Trapper sitting next to a Tygart Valley sign. So, they hit the road equipped with the box and determination to catch Bigfoot.

The AIMS team soon discover that they are in a cryptozoic creature hotspot unlike any other. As they chase the numerous monsters of the Tygart Valley and build breathtaking traps, they continue to learn that Trapper may have been onto this secret all along, and the key to the entire adventure may be within their reach. Welcome to the biggest, baddest and craziest season of MOUNTAIN MONSTERS yet.”

What do you think? Are you planning to check out the upcoming season of Mountain Monsters on Discovery+ or Travel Channel?

STUPID show! WHY do you keep doing this with dumb Bigfoot? Where are all the paranormal shows going? These Bigfoot shows are boring as hell! STOP IT!