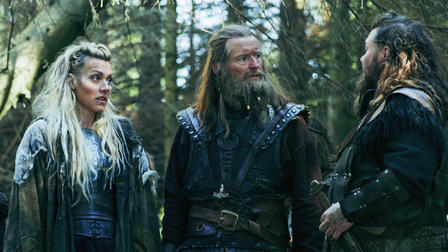 How do you make a show stand out on Netflix? Recently, Norsemen showrunner Anders Tangen spoke with The Hollywood Reporter about how the TV show got renewed for a second and third season.

Set in the 8th century, the comedy series centers on the everyday challenges of a Viking village. The cast includes Kåre Conradi, Nils Jørgen Kaalstad, and Silje Torp.

Speaking to THR, Tangen revealed he generated interest for Norsemen by launching his own ad campaign, including targeted Facebook ads and promotions:

Three weeks after we launched, Netflix called me: ‘You need to come to L.A., your show is exploding.'”

Apparently, Tangen’s Facebook campaigns “reached 5.5 million Facebook users, generating 2 million video views and some 6,000 followers for the show.” Now, Netflix has already committed to a second season and renewed the series for a third.

The lesson is, you can’t wait around for Netflix or anyone else to promote your show. It’s up to you to create the buzz.”

What do you think? Have you seen Norsemen? If not, will you check out the comedy series?

Norsemen is an absolutely hilarious show. My wife and I love it. I can’t think of any other program I look forward to seeing as I do this one. I saw it in the Netlix guide and I am so happy I gave it a chance..After binging it in a couple days I started searching for the season 4 release date which I have not been able to find. If Norsemen is as great for you please let Netfix, and anyone else you can find, know.. Let’s get season 4 and many other seasons in production..

Just started watching Norsemen. Cannot STOP… The show is non-stop dry humor, one line zingers, & just absolutely hilarious… If anyone loves M*A*S*H… The comedy is just the same.. Not comparing the 2 shows, just saying Norseman is a show worth watching.

I love this show it’s fun and you never know what’s going to happen next! I love how they write the show, hope it’s on for awhile. The seasons could be longer or you have to binge watch.

I agree, it’s compelling. We love it. I didn’t think I would like it but I’m hooked. It’s definitely unpredictable and hilarious.

I love the show. Bring back Silje. Monty Python meets the Vikings- what could be better?

Norsemen is tremendously funny and entertaining. I find it amazing that this talented group of actors films in their native language and again in English. I would watch the show if it were dubbed but the actors speaking English makes it more authentic. The writing is amazing and I just wish there were more episodes per season. I hope the show stays on the air as long as it remains such an all-around high quality production.

It is absolutely the Best show on Netflix! My husband and I started watching it and I said “Is this supposed to be funny?” It is funny, gross, funny. Love it!