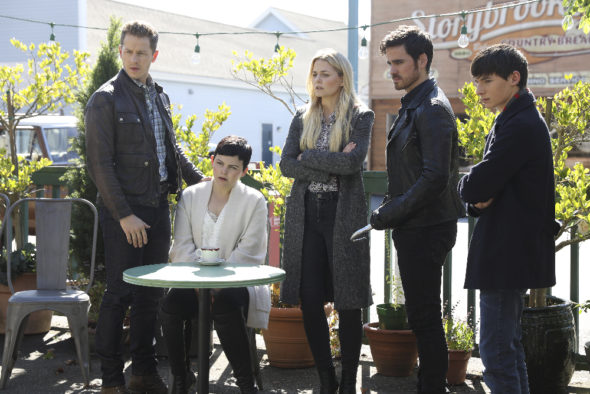 The show really needs to be cancelled this season, ESPECIALLY since they are only going to massively change it anyway. And why? Just to have a seventh season?!? I never heard of such stupidity, if it isn’t doing well after so many seasons as this then it is time to call it quits. They should just cancel it this season and give the fans a nice – and I mean the old fashioned fairy tale ending — wrap up to the series. ABC, PLEASE PLEASE HAVE MERCY ON US FANS AND CANCEL THIS SHOW!!!!!

It really is time to cancel this show, especially if they are only going to massively change it anyway just to have a seventh season — they need to end it this season and give the fans a nice wrap up to the whole series. ABC, PLEASE PLEASE CANCEL THIS SHOW!!!!

I really, really want the show renewed. If you want or need new story lines, why not go to untold stories. Please let Emma and Hook get married and be happy. When Hook killed David’s father that was before he had ever interacted with with David, Snow or Emma . David commented that Hook had done the hardest thing which was changing to be a better person. Don’t cancel the show. It is one of a very few that are family friendly.

I can’t imagine the show without any of the main characters, I love them all. However, if ABC decides to end it with six seasons, they need to give the characters and fans a happy ending.

Just had to type again, to stress how much it means to me and I speek for all once fans. I know that season 5 might have not been as good as others, but you are bringing it back up and I know it will be a great season 7!

Yes! Renew Once, i want see Snow White havig a new baby, pregnant again, and Regina having more personalities! I want Snow pregnant and Regina more powerful please, Renew! if Once is not renewed i don´t know what see.

Please don’t cancel OUAT, why not try changing to a different night or time to get more ratings? This is one of my favorite shows, I had to DVR it most of the time because it is at the same time I take my kids to bed, so it’s hard to watch it at that time.

You must renew this show if you don’t my heart would be cruched! I know that there is so much more that you can do in ONCE and this is my only life! I know that the ratings will go up in season 7 and if the show was cancelled if would DESTROY the lives of supper fans like me. YOU MUST RENEW ONCE or life will be over.

Once Upon A Time is my life. If they cancel it it’ll be like my life has ended, and this show let’s me out of my sucky life for a hour

We need to escape to back to Once Upon a Time. It is a just a feel good and inspire hope kind of show. This is what we need in todays world. Sailing is my passion, but you can not sail in the winter in VA, so I rewatch the entire series each winter. Although I am not really digging season 6 as much as previous seasons, I have HOPE that it will be renewed for many seasons to come.

Please do not cancel once upon a time

We NEED our show back! Please, please don’t cancel it!

Would love to see it continue! Look forward to see it