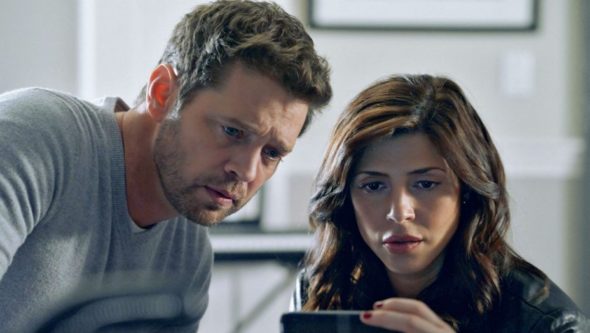 Meet the new faces coming on board during season 2 of #PrivateEyes! pic.twitter.com/NsJBT88EKz

What do you think? Have you seen Private Eyes? Will you watch season two?

When will new episodes continue? The show is fun and keeps your interest. The cast and its members have great chemistry! Really enjoyable.

When will new episodes of Season 2 resume? I think we’ve only seen 1 through 9 so far, and there are now only reruns available on ION.

I will stop watching this show if the writers make the main characters a love item. That is so cliche and I think more often than not spoils the shows.

My husband and I enjoy Private Eyes! The team works well together and the characters are very good.

My favorite new show..just discovered it. Trying to catch all of last season’s shows too.

Love this show! Watch or record every week….. don’t want to miss it !

My husband and I really enjoy watching Private Eyes! The connections between characters is fun to watch and there is always a mystery to solve.

Please keep this on ION!

Great Chemistry between Shadow and Everett. Nice clean show. Unlike the vulgarity on other shows.

A real good show ,no blood and guts ! like some other shows, good entertainment ,sometimes funny ,all around good show, please keep it going.

I really enjoy the show. I discovered it during a Sunday NCIS rerun marathon. To make sure I don’t miss it, I have it set up to record every week.

I saw, by accident, Private Eyes on ION and really liked it instantly. It’s a clean, fun program with good actors.