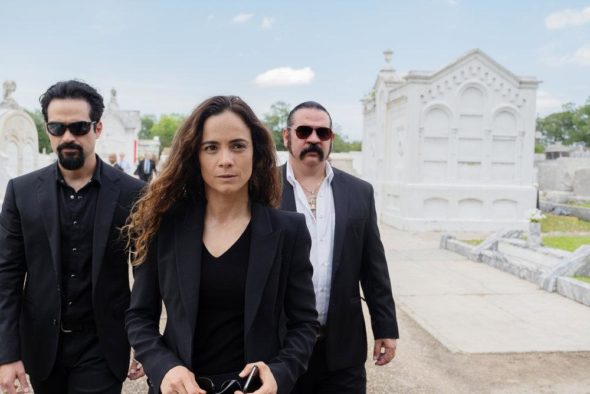 Queen of the South will continue its reign. Deadline reports USA Network has renewed the TV show for a fifth season.

It’s not surprising USA Network has renewed Queen of the South for a fifth season. The series has been one of the network’s top-rated shows since it debuted in 2016. And so far, season four has been no different.

Queen of the South is currently averaging a .29 rating in the 18-49 demo and 911,000 viewers. Even though that’s a near 20% drop in the ratings since season three, the show remains popular with fans.

The season four finale of Queen of the South premieres on USA Network tonight, August 29th, at 10 p.m. ET/PT.

What do you think? Do you watch Queen of the South? Are you glad it’s coming back for another season?

Its January 2020 and I have been waiting for Queen of the South episodes to begin again. My family and I make it a very big deal when the show comes on the air. I have lots of friends who watch the show also.

Does anyone know if the show will be back in 2020? We hope its soon. I mean real soon.

Absolutely love the show! Excellent writing and cast! Truly one of the great shows on tv…..

I love it and can’t wait for it to return when will it be back ?

Yes. I love Queen of The South. Hope it returns for a season 5.

I can’t wait until season 5 I’m so ready

So happy Queen of the South season 5 is happening. My hubby and I are great fans.

When is the show coming back on?

GREAT news Queen of the South is returning for a 5th Season. Can’t wait!!!!

Im so excited that season 5 is coming!! Yay! i love this show its so Awesome.. U go TERESA MENDOZA

Yes, I have enjoyed this show from the very beginning. They have developed each character very well. This to me is like the old Miami Vice but on a larger scale.

Man yes i love this show the best on TV since you took it off Netflix.So when is season 5 coming on?

This is one of the best series