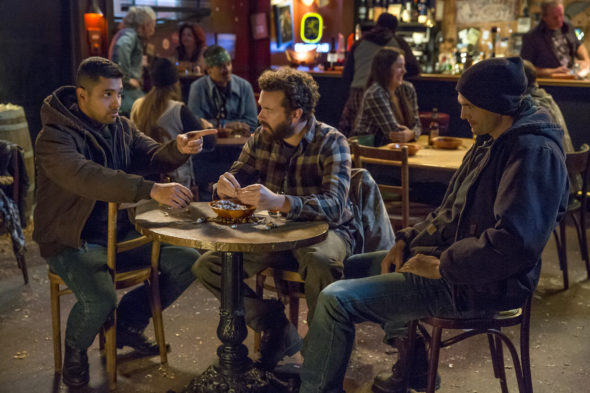 Meanwhile, back at the ranch… Netflix has announced the fourth part of The Ranch TV show premieres on Friday, December 15, 2017. Below, watch stars Danny Masterson and Ashton Kutcher reveal The Ranch part four release date, in a video in which they tout the show’s “Binge Race” performance.

Bear with us, for the sake of readers accustomed to season numbering. The Ranch part four is the same thing as The Ranch season 2B. Since each season of 20 episodes is split into two 10-episode parts, Netflix usually ignores season numbering entirely and references the sequential “part” numbers, instead.

The Ranch: Part Four Drops to Netflix on December 15th

What do you think? Are you still watching The Ranch TV series? How long would you like to see it run on Netflix? Let us know, below.

I just discovered this show a few weeks ago and have been binge watching – I just love it !!

We love this show at our home in Oklahoma! We been watching all these actors thru the years and love them all. I don’t want the Each to ever end.

I know that rape allegations are serious, but Danny’s case is “over a decade” old! That is too long to go back on him now! If anything had come of it, he should have been punished when it happened.

looking forward to part 4 – this series started slow but the cast got through it and they really shine.

Love this show & all the characters! Hope it’s around for many years!!

Play it out let it run forever!! Love it!!

You’ve got a great thing here with The Ranch please don’t mess it up and cancel it!! My husband and I love watching this on Netflix so please keep it going for lots of seasons to come!!!! Can hardly wait til December 15th!!!!

Love it can’t wait till Dec 15

Fun show, hope we see a number of seasons ahead.
Carmen