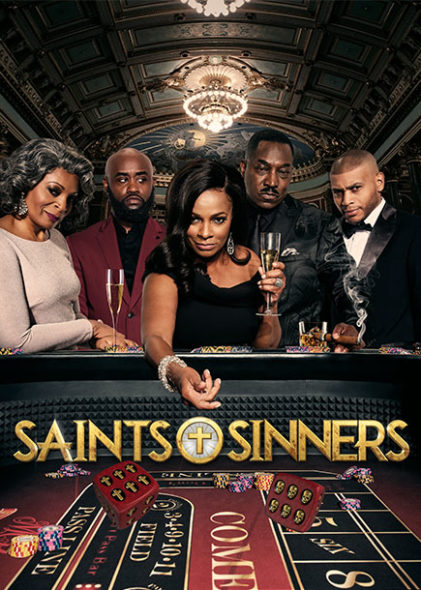 Does hope still abide at Greater Hope Baptist Church? Has the Saints & Sinners TV show been cancelled or renewed for a fifth season on Bounce TV? The television vulture is watching all the latest cancellation and renewal news, so this page is the place to track the status of Saints & Sinners season five. Bookmark it, or subscribe for the latest updates. Remember, the television vulture is watching your shows. Are you?

Will Bounce cancel or renew Saints & Sinners for season five? The Nielsen ratings for Bounce TV shows are so small, that it’s hard to use them to predict whether a TV series will be cancelled or renewed. The channel has revealed that the season premiere drew the best ratings in the channel’s history. So, I’m thinking that we’ll see a fifth season renewal. For now, I’ll keep an eye on the trades and press releases and update this page with breaking developments. Subscribe for free Saints & Sinners cancellation or renewal alerts.

8/13/20 update: Saints & Sinners has been renewed for a fifth season on Bounce TV.

What do you think? Are you glad that Bounce renewed the Saints & Sinners TV show for a fifth season? How would you feel if they had cancelled this TV series, instead?

I can’t wait for season 5,6,&7. I am hooked. You can run Saints & Sinners, all year, like you do, all those silly comedy shows, that other channels are running anyway! Keep it on, all year, Please! Peace & Love, Ron.

Saints And Sinners should run for at least 9 or 10 seasons in my opinion. I’m hoping to get every season of this show on DVD.

Almost everyone is crooked on this show. But the actors and actresses on the show portray crooks with first class acting. I believe in law and order. However, Saints and Sinners is a tv show and no law and order is needed here. For those hating on Lady Ella, her mom, Rex or anyone else on the show who isn’t a goodie two shoe. If you can’t take the heat get out of the kitchen. Some of us have enjoyed the saints and sinners too long to have any interest in seeing the characters reformed. Only real life characters need… Read more »

I would really hate to see this show cancelled. It is an excellent depiction of people who are backslidden, never known the Lord or who really are great pretenders. I would love to know who killed Malik and will there be a reconciliation between Miles and his spouse. These are outstanding actors/actresses. Please continue.

Yes please bring Saints And Sinners backI started watching series a month ago. And boy did I make the right decision. Turned it on to my mom and several friendsyou can’t leave off where Lady Ella getting framed for Maliks death‍♀️l love this show♥️♥️♥️

Please bring the saints and the sinners back

OH MY GOODNESS from beginning to END this show far exceeds 100% I’m giving it 1,000%. It is A MUST COMEBACK more seasons please. Don’t make us WAIT! Miles caused too much continuous PAIN to his wife and should be in jail for LIFE!! Leona needs to get the same medicine miles wife was given to hallucinate for 20 years and then prisoned in the same cell as her daughter. REX is soft now although the casino robbery was an emotional take down i still he needs to be head (security) of the casino reopening with a prominent position for… Read more »

Yes the show should continue.

Me to. Just finished binged watching all seasons. I hope for a season 5. A lot of entanglement lol

Please renew loved the show in total Limbo. Tired of them ending our shows with no closure. I want a season 5-6-7…..

YES IT SHOULD BE RENEWED. THEY CAN NOT LEAVE LOYAL WATCHERS HANGING LIKE THAT! IF THEY CANCEL THEN AT LEAST GIVE US A FINALE

Please bring this show back because it shows me that the saints of a church is very human. I want people from the cloth to realize that they shouldn’t be judging people because they sin just as worse as the people that isnt going to church.

Please renew saints and sinners because that was the best night soap opera I ever have seen.