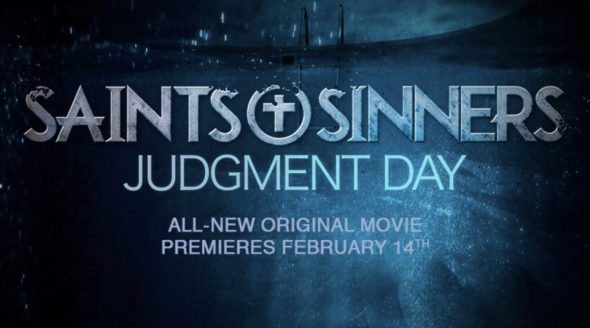 Here are the details from Bounce TV, along with a teaser video:

ATLANTA, Feb. 8, 2021 /PRNewswire/ — Bounce, the first and only broadcast and multi-platform entertainment network serving African Americans, has set the dates for the return of its top-rated and enormously-popular original drama Saints & Sinners.

Saints & Sinners: Judgment Day sees vengeance running rampant and family loyalty ceasing to exist in the small town of Cypress when Mayor Ella Johnson (Vanessa Bell Calloway) is arrested for killing Malik Thompson (Karon Joseph Riley) whose body is found at the bottom of her empty pool. Simultaneously, Ella’s mother Leona (Donna Biscoe) steps in to claim what she believes is rightfully hers — the key to the city — and will stop at nothing to achieve her goals. Robin Givens guest stars.

Saints & Sinners: Judgment Day will be available for viewing on February 15 on Brown Sugar, Bounce’s popular streaming service, with the complete first four seasons of the series available anytime. Bounce will air a binge-viewing marathon of seasons one-four starting April 8 leading up to the season five premiere.

Saints & Sinners is produced in partnership with Swirl Film’s Eric Tomosunas & Ron Robinson (Behind the Movement: The Rosa Parks Story, Love Under New Management: The Miki Howard Story, Tales, Pride & Prejudice). Nigel Campbell serves as the showrunner/executive producer of the series and the two-hour film, which he also wrote.

Bounce features a mix of original series, movies and specials, off-network series, theatrical motion pictures, live sports and events with programming seen over-the-air, on cable, on DISH channel 359, over-the-air, over-the-top on Roku®, on mobile devices via the Bounce and Brown Sugar apps and on the web via BounceTV.com. Bounce and Brown Sugar are both a part of The E.W. Scripps Company (NASDAQ: SSP).

What do you think? Do you like the Saints & Sinners TV series? Are you looking forward to watching the Judgement Day movie and season five?

I love watching the saints and sinner program that air on Sunday judgement day and I like to know if it going to be on DVD cause I like to get the first air of the program to when it may end for my collection this is the best and off the hook black American stars ever and better than the soap that comes on very day Monday thru Friday,thank you for the best respectful black American story of judgement day and it’s getting better every Sunday

Saints and sinners movie was totally awesome ,and I am so happy they left that other mess out of it ,I won’t say what ,the writers did a awesome job

From Toya Marris I am very upset that again the time was wrong on Bounce tv. When it first came on , I was faithful then the time was mixed up and the days for pacific time. I wanted sooo bad to watch the movie on Sunday February 14,but again I was disappointed with the time. I waited and waited, it was movie after movie. No Saints and Sinners at 9pm. I even double and triple check the time. I even got heads up through a watcher in the Atl.!!! Still it didn’t show. I love this show but your… Read more »

I was super excited for this to air and the new season. This is a very good show. Cast is phenomenal. Thanks for bringing this show back.

I am soooo excited to hear about this movie. Waiting for the series to come back on. Great show. I love it. Wish it was a daily show. Thank you.

Can’t wait to see it!

Saint and Sinners is really exciting and full of deceit. I’m just hoping it has 10 episodes or more it deserves it. The acting is really good. Love Rex Fisher and Lenora, they really make the show. All the cast members are superb. I just like the bad GUYS. Hat off to the writers as well. Don’t stay away too long next time. This show has truly been missed. Looking forward to season 5. CAN’T WAIT ♥️ Tina

This show is going too blow your mad .i love this show . .
I cant get. Over. , who fool.me