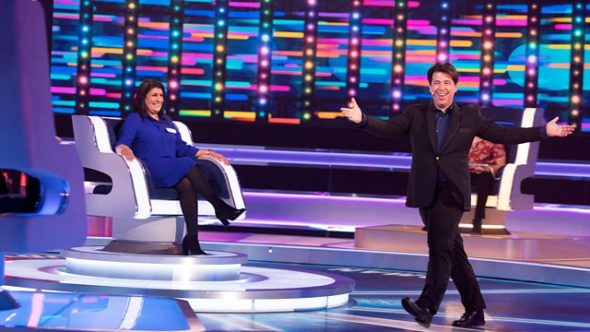 Michael McIntyre’s The Wheel debuted in November on BBC One and has quickly become a very popular show in the UK. Now, NBC has decided to launch a version of the comedic game show in the United States.

The peacock network has ordered 10 episodes of The Wheel and it seems likely they’ll launch the series this year, especially considering the format is conducive to the age of social distancing.

The competition provides three contestants an opportunity to battle it out through general knowledge questions. The objective is to keep their spot at the center of the wheel. Only that contestant has a chance to take home a life-changing sum of money at the end of the game. The contestants aren’t alone as there are seven celebrity experts on the wheel, ready to help them answer questions.

Here’s the NBC press release as well as a sample episode of the UK version (courtesy of YouTube).

NBC UNSCRIPTED IS TURNING UP THE HEAT WITH ‘THE WHEEL,’ THE BBC’S #1 GAME SHOW LAUNCH IN A DECADE

UNIVERSAL CITY, Calif. – Feb. 8, 2021 – Coming off an unprecedented run in the UK, an all-new US version of ‘The Wheel’ has landed a 10-episode series order on NBC.

A hilarious new take on the game show format, the series is set to put viewers into a spin each week as celebrity guests attempt to help contestants win big. Full of edge-of-your seat jeopardy, plenty of laughs, huge stars and a spectacular 42-foot-wide spinning wheel, the series debuted in November as the top game show for BBC Primetime since 2011.

‘The Wheel’ will be produced by Warner Bros. Unscripted Television’s Warner Horizon division and the original British creative team, Hungry McBear and Michael McIntyre, who hosts the UK version.

“We knew that NBC was the perfect home for ‘The Wheel’ within the first few minutes of watching the show. It’s inherent ingenuity and addictive game play immediately hooked us,” said Jenny Groom, Executive Vice President of Unscripted Content for NBCUniversal Television and Streaming. “We couldn’t be more thrilled to add this to our strong roster of game show formats.”

“It’s incredibly rare in this day and age for a new show to become an unqualified smash hit overnight … let alone in the biggest territory in Europe,” said Mike Darnell, President of Warner Bros. Unscripted Television. “We are thrilled to be in business with Hungry McBear and our amazing partners at NBC, who immediately saw ‘The Wheel’s’ potential and picked it up within 24 hours of the pitch.”

“I’m thrilled ‘The Wheel’ is spinning Stateside,” Michael McIntyre said. “Hosting this show is the most fun I’ve had on television. The format creates wonderful camaraderie among the celebrities, natural hilarity and genuine suspense. I can’t wait for ‘The Wheel’ to roll across America.”

Dan Baldwin, Managing Director of Hungry McBear, added: “We are absolutely delighted that ‘The Wheel’ has been picked up by NBC. We are excited to introduce American audiences to this incredible game show. Together with our partners at Warner Bros., NBC viewers can look forward to lots of big laughs, big spins and big wins!”

The game provides three contestants an opportunity to battle it out through general knowledge questions where the objective is to keep your spot at the center of the wheel. The contestants themselves are randomly picked from a smaller wheel underneath centerstage. Right answers keep you there, wrong answers throw you out. Only the contestant at the center of the wheel at the end of the game has a chance to take home a life-changing sum of money, so they must do their best to stay there. The contestants are not on their own. There are seven celebrity experts on the wheel, ready to help answer the questions. With a mixture of real people, larger-than life celebrity experts and a massive rotating wheel under the host’s command… the fun and challenges are unlimited.

The series was created by Michael McIntyre and Dan Baldwin, who executive produce with Mike Darnell and Brooke Karzen.

ABOUT WARNER BROS. UNSCRIPTED TELEVISION
Warner Bros. Unscripted Television is the leading producer of unscripted television in America with over 50 series totaling some 2,500 hours of programming annually across broadcast, cable, streaming, digital, and first-run syndication, as well as high-end documentaries. Led by Mike Darnell, President, the division produces major franchises that include the long-running, powerhouse franchise of ’The Bachelor,’ ‘The Bachelorette,’ and ‘Bachelor in Paradise’; multiple Emmy winning ‘The Ellen DeGeneres Show’ and the primetime hit ‘Ellen’s Game of Games’; the multi-Emmy winning blockbuster ’The Voice’; the Fox hit ‘The Masked Dancer’; the Emmy winning ‘Who Do You Think You Are?’ returning to NBC; ’The Real Housewives of New York’; ’The Bradshaw Bunch’; ’Extra’; and ’The Real’; plus, the Greg Berlanti produced signature documentaries ’Helter Skelter’ for EPIX and ‘Equal’ for HBO Max, among others. The unscripted unit also recently announced the upcoming the hybrid alternative-scripted series ‘True Story’ with Ed Helms and Randall Park; ‘Ellen’s Next Great Designer’ for HBO Max; the Ava DuVernay produced ‘Home Sweet Home’ coming to NBC; and the highly anticipated ‘Friends’ reunion coming to HBO Max.

What do you think? Are you familiar with The Wheel TV series from the UK? Do you plan to check out the NBC version?

This could be interesting.