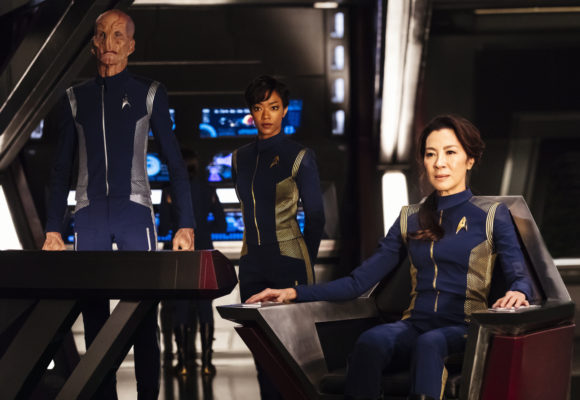 Did you see the Star Trek: Discovery finale? Recently, executive producers Gretchen J. Berg and Aaron Harberts spoke with TVLine about the future of the CBS All Access TV show.

On the season one finale of Star Trek: Discovery, fans saw a brief cameo from the USS Enterprise. What does this mean for season two? EP Aaron Harberts says:

I think one of the biggest things it’s going to allow us to do is start to develop how Discovery fits into canon. One of the big things that’s been polarizing for fans is, “We’ve never heard about Discovery! How does it fit? She’s related to Spock?” All those things. And what it’ll allow us to do is hit that straight-on. We see it as an exciting opportunity to say, “This is exactly how Discovery fits into the timeline. This is exactly how we can reconcile the choices we have made.” Because at this period in time, the Discovery and the Enterprise are the crown jewels in the fleet, so they should be face-to-face.”

And what else can fans expect from season two of the CBS All Access series? Maybe more Christopher Pike? EP Gretchen J. Berg said it’s a possibility:

If there ever were to be a captain from canon that one could explore… Christopher Pike would certainly be that one.”

What do you think? Are you a fan of Star Trek: Discovery? Did you enjoy the season one finale?

If you did not bother to make the effort to see all 15 episodes of Star Trek Discovery, hold your judgment! As a lifelong Trekker, from the original in the 60s until this newest version, I DID watch all 15 episodes carefully. The first two episodes were terrible and I almost did not go on. They honestly should be redone! This show finally found its footing in further episodes. And, to be honest, I will rate this one an 8 in IMDb. To base your opinion on either never seeing it or watching one episode is remarkably uninformed. I look… Read more »

Fantastic. We a family of four. My hubby, my two boys aged 18 and 28, and myself. Huge fans. Love it

Nope didn’t see since I won’t pay for CBS all access. I already subscribe to other, better streaming services offering more than one show I might watch.

I’m glad to see that Discovery is making the effort to fit into the Star Trek canon. I only saw the first episode and I was not impressed with how Discovery did not connect well with the original Star Trek. For instance, how the Klingons looked. Maybe this show has evolved into something worth watching but I still won’t watch it until I can see it in a format such as Netflix or regular TV where I don’t have to pay extra. I’m sure that there is a lot of other fans that also feel the same way. I hope… Read more »

Discovery is a fantastic fun-filled version of the Star Trek series, I can not wait to see where meeting the Enterprise crew takes them next season.