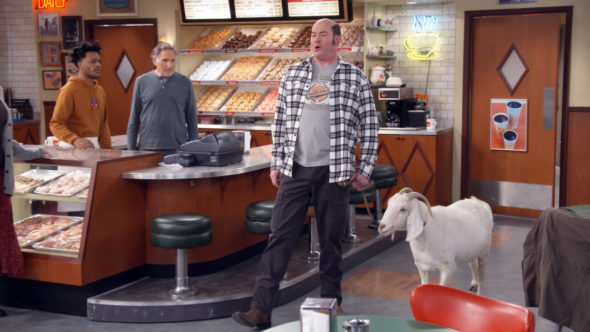 It looks like the Tiffany Network is going low-carb. CBS has cancelled its Superior Donuts TV show after two seasons. The comedy was never a Nielsen darling and barely eked out a renewal last year, so this cancellation was expected.

The second season of Superior Donuts is averaging a 0.89 rating in the 18-49 demographic and 5.094 million viewers. Compared to season one, that’s down by about 23 % and 18%, respectively. By both measures, Superior Donuts, season two, has been among the lowest rated scripted CBS TV shows.

What do you think? Did you like the Superior Donuts TV series? Did you think CBS would cancel or renew it for season three?

This show is a great escape after a long day. Please reconsider cancelling this show.

My son and I really enjoyed this show. We are so disappointed it’s cancelled. Please reconsider.

Please keep the Show ‘Superior Donuts’ on. Sure…it is a silly show and corny at times, but it is fun! All of the cast is funny and they are all good actors. Even if the ‘Superior Donut’ shop is sold in the last episode, there can be many stories to go into with all of the characters. Keep the Show give it a chance to go further with their comedy.

I was just starting to like the show now it’s cancelled? Like another reviewer said more reality shows to look forward to? I hope not

I liked the show. Nice, easy watching. Way to many reality and cop shows on tv. Can’t we laugh a little sometimes?

It was a good show and one we looked forward to each week.

I rather liked superior donuts. Nice mix of old school and younger players.Itinproved in year two.

NOOOO we love this show, to bring back the stupid reality shows???? You have cancelled at least 2 good shows that we watch, you have lost us to Netflix or Amazon – bye

only watched one show and hated it. Started to watch another just for a second look and started channel surfing after 10 minutes. too preachy, not funny at all

I honestly liked this show a lot but, I will admit that most of the humour is of a different time. That wasn’t appreciated as much by today’s audience. Not the way it should have been. Maybe if the show was on a different network, it would have stood a chance at being on for another couple of years.

I’m very sad it was cancelled:(

While watching this show…You could actually feel your IQ drop.

I enjoy the show, maybe they can shop it to another network