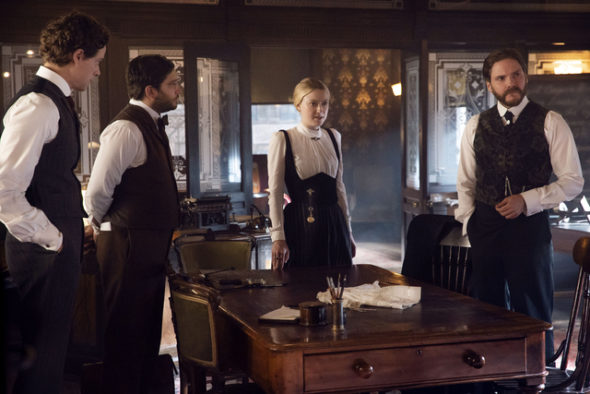 Can the team solve the mystery in the second season of the The Alienist TV show on TNT? As we all know, the Nielsen ratings typically play a big role in determining whether a TV show like The Alienist is cancelled or renewed for season three. Unfortunately, most of us do not live in Nielsen households. Because many viewers feel frustration when their viewing habits and opinions aren’t considered, we invite you to rate all of the second season episodes of The Alienist here.

What do you think? Which season two episodes of The Alienist TV series do you rate as wonderful, terrible, or somewhere between? Do you think that The Alienist should be cancelled or renewed for a third season on TNT? Don’t forget to vote, and share your thoughts, below.

I love this series! I hope to see another season!

Please renew The Alienist for another season. And some advance notice please. Also don’t go up against some the best period PBS series on sundays. Very stupid. I need to record one or the other. And older people watch too!

I love this show. It is so well written and suspenseful – please make a season 3 and beyond.

I love the Alienist . Also John and Sara relationship on the show .
I felt you should have kept it on a Wednesday night like season one . Please have a season 3 .
Again I love the history of the show and the characters.

Episodes 5 & 6 maintain a superb level of intrigue, twists and turns. It makes me sad that the last two episodes are airing next week. Come on TNT!!!! Get crackin’ with season 3!!!!!!!

Absolutely Love Alienist! We love the twists and turns. All of the actors bring you right into their world. NYC was so nasty dirty back then, unless you’re Randolph Hearst and his Goddaughter who’s been lavished her whole life and is so immature.
Were ready for next Sunday night and please keep them coming!

Episodes 3 & 4 were great! Episode 4 had a twist I didn’t expect and didn’t see coming! Excellent job all around!!!

Love, love, love the show! And viewership might be down due to the fact that it airs the same time as YELLOWSTONE. YELLOWSTONE has a larger fan base due to the fact that it’s in its 3rd season. Please TNT give THE ALIENIST a chance. The cast is amazing, the costumes are spot on, and the sets are awesome. Sometimes good things need to simmer a while before the potential is recognized!

The first two episodes of Angel of Darkness were awesome, picking up the chemistry where season 1 left off. But if I remember correctly the first season of The Alienist aired in the fall / winter and midweek. This season 2 airs on a Sunday in the summer, so comparing viewership and percentages is apples and oranges and a poor excuse to cancel. Additionally TNT’s excessive long wait between season 1 and 2 can make viewers forgetful and lose interest. Please don’t cancel this excellent show due to TNT’s own bungling program schedule. If anything the next installment should move… Read more »

I am enjoying Elizabeth’s opening appearance “full-horse throttled” thru the streets of New York! Her tough side is challenged by a police beating, yet she refrains to maintain her composure.
I would however, like to see her beat the crap out of a cocky cop in the good ole Dakota Fanning style!
So far, my impression of the Dr and the Artist seem meek in comparison to last season. But I can also see the three of them banning together as equals in a “3 Musketeers” sort of way.

Enjoying this season, so far, as much as season 1. Love the acting and intrigue… keeps you guessing!

Recorded the shows, haven’t watched them yet, but looking forward to watching both episodes tonight.