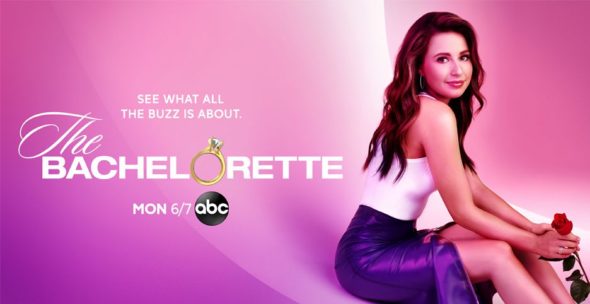 A dating reality show, The Bachelorette revolves around a single woman who sifts through a large group of eligible male contestants in the hopes of finding a romantic match and, possibly, a mate. Season 17 follows 30-year-old Katie Thurston, a bank marketing manager from Lynnwood, Washington, who is an alumna of the 25th season of The Bachelor, featuring Matt James. Due to the pandemic, production on this season was moved to a resort in New Mexico and there will be 30 male contestants this time around. For season 17, Chris Harrison has been replaced by Bachelorette alums Tayshia Adams and Kaitlyn Bristowe.

8/10 update: You can see the latest night’s ratings in context.

For comparisons: Season 16 of The Bachelorette on ABC averaged a 1.31 rating in the 18-49 demographic and 4.73 million viewers.

What do you think? Do you like The Bachelorette TV series on ABC? Are you glad that it’s been renewed for an 18th season?

Please bring back Chris Harrison!!! Nothing against the girls it is just not the same!!! I watched maybe 3 episodes of this season! This has always been a must see show but, Not anymore!!!

This is the worst bachelorette. No class and no depth. Chris Harrison’s absence is glaring.

No Chris Harrison? No show. Period. Although his part was minimal, his presence was necessary. Getting rid of Chris Harrison is akin to replacing Ryan Secrest on American Idol. Like the show or not, you can’t get rid of a “main player” and expect to keep the ratings up. PLUS – the REASON Chris left the show….even more of a reason to never watch a Bachelor/Bachelorette episode again. I’d rather watch paint dry.

I watched every season but the first one, and I will never watch another episode since you fired Chris. Too bad it got renewed, good riddance as far as I’m concerned.

Will never watch bachelorette/bachelor again. My version of cancel culture. The show needs to be cancelled. Chris was the show. New hosts are ridiculous and ineffective.

So glad the ratings are off. Chris is Bachelor Nation. Never missed a show until this season. I refuse to watch it without Chris. Hope he moves on to bigger & better things.

The Bachelorette isn’t the same without Chris Harrison, it’s stupid this year, I don’t even like watching it, to be honest with you.

Getting rid of Chris killed the show. From a marketing standpoint you can’t alienate your viewing audience. You may target the younger audience but your bread and butter was a much older demographic.

Will not watch any Bachelor/Bachelorette/Bachelor in Paradise since they fired Chris Harrison.

I’m not watching without Chris. They sold out Rachel and they sold out Chris and I hope they get canceled – the entire franchise.

No I’m not glad it’s been renewed. When Chris was fired the show should have been shut down.

You could mute it and play the audio from every other season and not know the difference. It’s like being addicted to saltines with margarine.

I’m not sure how to answer , I use to like it ….then it became way to predictable.