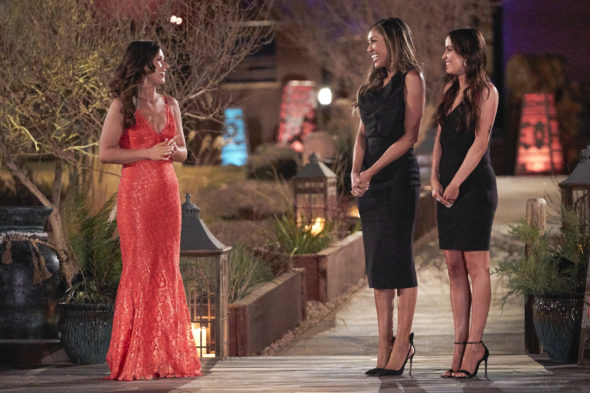 How will the two new hosts do? Has The Bachelorette TV show been cancelled or renewed for an 18th season on ABC? The television vulture is watching all the latest cancellation and renewal news, so this page is the place to track the status of The Bachelorette, season 18. Bookmark it, or subscribe for the latest updates. Remember, the television vulture is watching your shows. Are you?

Airing on the ABC television network, The Bachelorette revolves around a single woman who sifts through a large group of eligible male contestants in the hopes of finding a romantic match and, possibly, a mate. Season 17 follows 30-year-old Katie Thurston, a bank marketing manager from Lynnwood, Washington, who is an alumna of the 25th season of The Bachelor, featuring Matt James. Due to the pandemic, production on this season was moved to a resort in New Mexico and there will be 30 male contestants this time around. For season 17, Chris Harrison has been replaced by Bachelorette alums Tayshia Adams and Kaitlyn Bristowe.

The 17th season of The Bachelorette averaged a 0.92 rating in the 18-49 demographic and 3.66 million viewers. Compared to season 16 (which aired in Fall 2020, when TV viewership is typically higher), that’s down by 30% in the demo and down by 23% in viewership in the live+same day ratings (including DVR playback through 3:00 AM). While these numbers don’t include further delayed or streaming viewing, they are a very good indicator of how a show is performing, especially when compared to others on the same channel. There can be other economic factors involved in a show’s fate, but the higher-rated series are typically renewed and the lower-rated ones are cancelled. Find out how The Bachelorette stacks up against other ABC TV shows.

We don’t have to wonder if ABC will cancel or renew The Bachelorette this time since it’s already been renewed for season 18 for Fall 2021. I’ll update this page with breaking developments. Subscribe for free alerts on The Bachelorette cancellation or renewal news.

What do you think? Are you glad that The Bachelorette TV show has been renewed for an 18th season? How would you feel if ABC cancelled this TV series, instead?

So wrong getting rid of Chris Harrison we watched the Bachelorette, with Katie, so put out. We will not be watching any of them in the future.. we have wiped them from our DVR schedule. These shows have gotten so cheezy.. like not real… and to have Blake come on in the middle… just not right.. if you really watch the show.. its just sooo fake.. reading scrips. Good bye and the rest of our family will be watching something else.

The whole Chris Harrison exit was a huge mistake. Should never have played out the way it did. I have watched the show from the beginning but no longer a fan. My daughter also agrees.

Bring back Chris Harrison- not the same without him and watching these girls is painful!

After this long and every show is basically the same thing, I really would not care .

I dont care for the current season. It’s just not the same without Chris Harrison. And now finding out the reason he left is very upsetting. Guess we can thank the interview with Michael Strahan for Chris’s departure. Never cared much for Michael Strahan. Now I really dont like him. He finished off what Rachel Lindsay started.

As far as I’m concerned the Batchelor and Batchelorette series can go be canceled indefinitely! Garbage