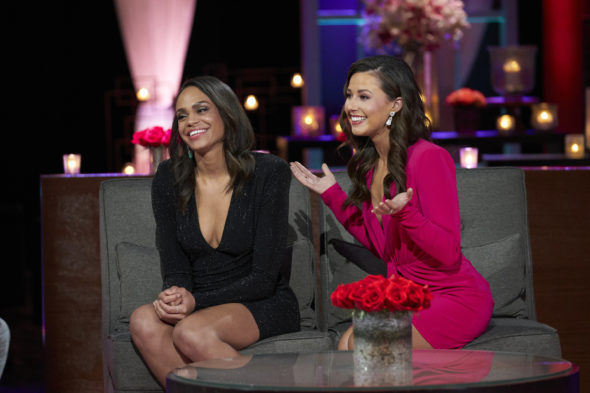 Due to production delays caused by the ongoing pandemic, ABC had to delay the 16th season of The Bachelorette until Fall 2020. The dating reality series typically airs in the summer months. Tonight, during the 25th season finale of The Bachelor, the alphabet network announced that The Bachelorette had been officially renewed for two seasons.

Season 17, which will revolve around Katie Thurston, will air this summer. Season 18, which will follow Michelle Young, will air in Fall 2021 as part of the upcoming 2021-22 television season. Both Thurston and Young were featured in the just-ended cycle of The Bachelor. We know that longtime host Chris Harrison won’t be back for this summer’s season of The Bachelorette and it is unknown if he will return for the fall’s.

Here are some additional details from ABC:

Katie Thurston and Michelle Young have been named the next stars of the 17th and 18th seasons of “The Bachelorette,” respectively, with both individual cycles set to air in 2021. After appearing in the landmark 25th season of “The Bachelor,” both women emerged as fan favorites among Bachelor Nation, with viewers all over America rooting for their happily ever afters. As the upcoming stars of ABC’s hit romance reality series, they will each step into the spotlight, now blazing a path for their own love stories to unfold. Katie’s journey as “The Bachelorette” is set to premiere Summer 2021, and Michelle’s season will air Fall 2021.

The official announcement was made by “The Bachelor: After the Final Rose” host Emmanuel Acho during ABC’s emotional special following the finale of Matt James’ season.

Katie Thurston, “The Bachelorette” season 17 premiering Summer 2021
Among the season 25 women, Katie emerged as a leading voice, who repeatedly stood up against bullying and negativity in the house, and women all over America applauded her for speaking up for what she believes in. The 30-year-old Washington native became an instant fan favorite for her memorable arrival on night one where she introduced herself to Matt, light-up vibrator in tow. Unapologetically herself, Katie is adventurous, daring and ready for a man with whom she can build a life. A marketing manager with an innate social media savvy and humorous outlook on life, she is a witty storyteller who wants a man that will laugh along with her.

Michelle Young, “The Bachelorette” season 18, premiering Fall 2021
After joining the season as a late arrival, Michelle immediately stole The Bachelor’s attention, along with the hearts of millions of Americans who fell in love with her captivating smile and charming sense of humor. A former Division I basketball player from Minnesota, the 28-year-old kindergarten teacher now focuses on preparing her students to be the next generation of community leaders. Michelle has big dreams for the future and says she wants a man by her side that is supportive and driven to make the world a better place. She is looking for the Superman to her Superwoman and is ready to find a love with whom she can start a family of her own.

What do you think? Do you enjoy The Bachelorette TV series? Do you think it’s a good idea to air two seasons in one year?

I will no longer watch these shows. The last Bachelor was a joke and without Chris is another reason I will never watch again!

I have watched since Ryan and Trista.
I’m very upset that Chris isn’t on any more, so i won’t watch ever again!
Chris you did nothing wrong!!!!

Do these shows not bring out the worst in women? Since only a handful of couples have stayed together, the only thing for women to do is sit back, and be snarky about each of the contestants.
They know that at the end they last several months for the most part, and the men drop off the map, and the women end up on D.W.T.S. for a season.
It is definitely not a serious matchmaking show wouldn’t you agree? So what is the point?

I’m ok with doing the 2 seasons back to back as long as they play out better than Matt James season. It has to go down as one of the worst Bachelor shows ever. Mainly because of his failure to make decisions and communicate.