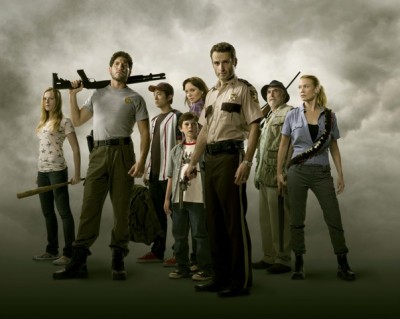 While trying to survive he searches for his wife Lori (Sarah Wayne Callies) and their young son, Carl (Chandler Riggs). A smart and calm leader, Rick sets off for Atlanta where the Center for Disease Control and Prevention is said to have set up a quarantined safe-zone.

Love the series. Have missed too many episodes cox of time slot changes and no warning.

I think the walking dead has one or two more seasons left. Tgrt is typical for a cable show. How many ways can you kill the “dead”? The only reason it would stay around is if a KEY or major character dies. That makes sense.
OR meet up with the people from Fear the Walking Dead. In the middle of the oUS or somewhere, eh? That is a great show as you see HOW it starts. Think about it?

One major character died in season 8, episode 9. One of the other main characters may be killed off because that person has been offered a spot on a new TV show. Lennie James is leaving to go do Fear The Walking Dead. make sure you watch the rest of the season. Considering how pathetic Network TV is becoming, this show better be on until at least I am dead.

Does anyone know when Season 5 is coming out on Netflix?

I am 60 and while this is not my normal type of show I have been hooked on this show since the beginning. I can’t wait from season to season to see what is going to happen next. Hate to see any of the characters lose the battle, but I know that is inevitable in such a horrific environment. The case is amazing the story line incredible and the special effects unique, ever changing and absolutely mind altering. I hope this show continues for many more seasons.

Well, I am 83 however I like this show too.
My hearing is not good, so I read the text as fast as I can. However it would help me follow the conversation better if the text font is made larger. Thanks
Jimbo

The best show I’ve seen in years, always keeps me on the edge of my seat, you really never know what is going to happen!

I AM A FAN AND LOVE IT

The last season was horrible.

I don’t watch it.

Huge spoiler for those interested, it’s all a huge dream sequence for deputy sheriff grimes , the series finale has him waking from his coma and the zombie apocalypse never happening.

All in YOUR dreams, Bud! The comic series is still going & the TV series finale is a thing not even thought of at the moment. So no spoilers exist.

Thats so funny that you said that because I just jokingly told that to my kids the other day. If they did do that I think there would be riots in the streets lol.

EVERYONE suspects that to happen, so why would they make it happen? And if the show is going to use science, you can only have dreams of people you’ve seen before. And Rick has experienced extreme pain and emotions so he would’ve waken up already, long ago actually.

Now in 2018 and on season 8 and he hasn’t woken up from that dream ur talking about lmao so what r u talking about? Lol

I hate movies about zombies or the walking dead. However, this series has kept me intrigued due to it’s superb writing. My wife and I have been sucked into watching this show and can’t wait for the return in February 2013. Thank God the Mayan’s were wrong. One sad note however needs to be stated. Other than stupid reality shows and sickening game shows that air on the regular networks i.e. Fox, NBC, CBS Etc. it is not surprising that more and more people are tuning in to channels such as SiFi, A&E, Starz, HBO etc.

I agree brother this show has been very intriguing. I have always hated zombie shows or movies till this walking dead came on and alll I can say is WOW awesome job cast and writers

[…] hasn’t renewed The Walking Dead for a fourth season yet but they surely will. The TV series remains a huge success for the cable […]

[…] are more popular than ever and The Walking Dead brought huge ratings to AMC last season. Will they continue or could they drop low enough to see […]

[…] even without Dish Network viewers. Despite the fact that AMC is no longer carried on Dish Network, The Walking Dead’s season three premiere set all kinds of ratings […]

[…] fight for survival continues in October. AMC has announced that the third season of The Walking Dead will kick off on Sunday, October 14th, at 9pm. The cable channel renewed their very popular show […]

[…] Dead is an unscripted companion to the cable channel’s popular horror series, The Walking Dead, and typically follows episodes of that show. Season one had 13 episodes and concluded on March […]