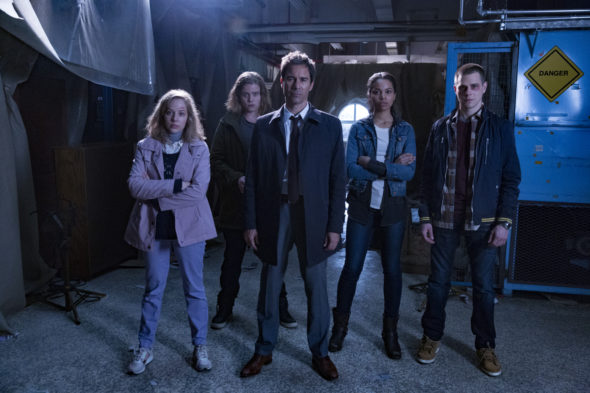 TV show description:
A Canadian-American science-fiction mystery drama from creator Brad Wright, the Travelers TV show unfolds in a post-apocalyptic future, in which special operatives travel back in time to save humanity from destruction. Unlike many time-travel stories, there is no time machine involved. Instead, a special operative known as a “traveler” transfers his or her consciousness into the body of “target” just prior to that person’s death.

Locating the 21st-century target in the right time and place is possible, thanks to people’s reliance on smartphones, social media, GPS, and the like. Once a traveler has pinpointed and taken over a target’s body, that traveler must live in-character as the host (i.e. the person who originally possessed the body).

While going about the business of living the target’s life, the traveler — as part of a team of five — carries out secret missions in furtherance of the cause. They report to an entity known as “the Director” — an artificial intelligence dedicated to saving the world. The Director monitors events of the 21st century, as the travelers carry out their missions.

The story centers on a team of five operatives. Traveler 3468, aka Grant MacLaren (McCormack), is the team leader who takes over the life an FBI Special Agent. Working along with him are: Traveler 3569, aka Marcy Warton (Porter), who is living as an intellectually disabled person; Traveler 3465, aka Carly Shannon (Cooper), the team tactician, who is living as single mom; Traveler 0115, aka Trevor Holden (Abrahamson), the team engineer who is posing as a high school athlete, despite being one of the oldest humans in existence; and Traveler 3326, aka Philip Pearson (Dolman), the team historian who has taken over the life of a young opioid addict.

Together, they must work to save the human race, while appearing to all around them as ordinary people of the targets’ time and place.

Series Finale:
Episode #34 — Protocol Omega
Shattered by recent losses and a sweeping new protocol, the Travelers face a bleak future with only one long-shot chance to succeed in their mission. (Courtesy of Netflix)
First aired: December 14, 2018

What do you think? Do you like the Travelers TV series? Should this Netflix TV show have been cancelled or renewed for season four?

Sad this series has been cancelled and I wonder why. It has a great cast, good production values, interesting story line. Why cancel this when so many stupid, trivial shows keep going on and on.. Sci-fi always has troubles, though it also has many devoted followers, like me, for instance.

I enjoyed this series. It was different but the characters were great. Sad its been cancelled.

This is one of the finest sci-fi series on tv in a long time. Character development was outstanding. Got to really feel for the team and their determination to save our earth. Need to have the series renewed and continued.

Love this series!!! There should be more.

I think you missed up a good show by ending it too soon!!! Please reconsider!!!

This was becoming a mesmerizing story with a long twisted road ahead.
I cannot understand why they wont give these stories longer to get a hold of their viewer base.

only show I liked

Please bring Travelers back.. It was such a great show. What a cast, what a story. I am really hooked on it. What is wrong with you netflix. Have you lost your mind! All you want to show are those teenager silly shows in which the acting really stinks.

You had a good product and then you ruined it…..for what!!!

I’ve watched several of the Netflix shows and movies and some deserved to be cancelled. This is by far one of the better ones. If they don’t see that they have a great series then how can they expect to make a better one!

Travelers is a fantastic show – great acting and story. My entire family loved it and is very disappointed to see it end. Many friends watched too. Please bring it back!

Just finished watching all three seasons of Travelers. The writers have kept the story lines fresh each of its three seasons. The set up in season three is perfect for a fourth season and the established storyline would allow many good options for a fifth season. Please continue this show!!

Figures, I watch and love the show and its cancelled…. BLAH!!!!

Please bring Travelers back!!! It’s the best sci fi in a long time!