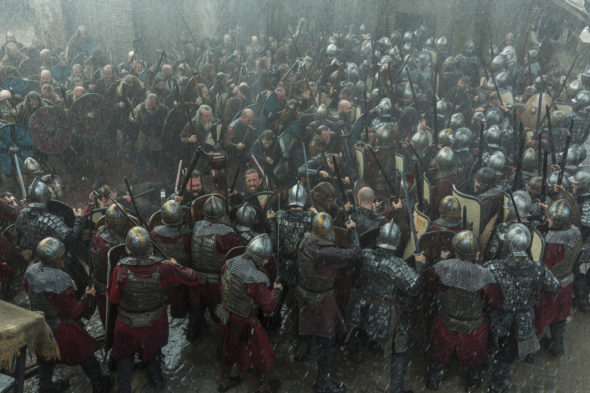 How far can the Vikings extend their reach? Is the Vikings TV show cancelled or renewed for a sixth season on History? The television vulture is watching all the latest cancellation and renewal news, so this page is the place to track the status of Vikings, season six. Bookmark it, or subscribe for the latest updates. Remember, the television vulture is watching your shows. Are you?

A History channel action-adventure series, the fifth season of Vikings stars Alexander Ludwig, Alex Høgh Andersen, Peter Franzén, Katheryn Winnick, Jordan Patrick Smith, Gustaf Skarsgård, and Jonathan Rhys Meyers. The period drama delves into the Viking warriors and their strange, ruthless world. Season five kicks off with Ivar the Boneless (Andersen) asserting his leadership over the Great Heathen Army, as Queen Lagertha (Winnick) reigns as over Kattegat. Meanwhile, after avenging their father’s death, the sons of Ragnar (Travis Fimmel) devise a new strategy. Surprising alliances and astonishing treachery rule the day, even as the Vikings aspire to rule the world.

The fifth season of Vikings averaged a 0.46 rating in the 18-49 demographic and 1.90 million viewers. Compared to season four, that’s down by 30% and down by 16%, respectively. Find out how Vikings stacks up against other scripted History TV shows.

Despite declining ratings, History renewed Vikings for a sixth season, a couple of months ahead of its season five premiere. After the season four finale, creator Michael Hirst said he thought there was sufficient material for another two seasons and that they’d end the historical drama on their own terms. Will it end with season six, or will History want to continue the story? That remains to be seen. I’ll keep an eye on the Nielsen ratings and update this page with breaking developments. Subscribe for free alerts regarding any Vikings cancellation or renewal news.

I think the show is without a doubt one of the ALLTIME MOST AMAZING DRAMA SERIES EVER TO HAVE GRACED OUR SCREENS !! Not only for the feeling of it being very real but also the fact that the actual cast are at the same time growing up,adding to there characters realism as the show goes on,I love waiting until the full 20 episodes are ready to view and then I can binge watch,simply because I am too impatient to wait from week to week,especially when for me it’s like having a habit of some sort and can’t wait until… Read more »

We love this show and hope it stays on!!!!

I really like this show so much! Despite the violence and treachery, the show is believable. I am happy the show has been renewed.

The show is fantastic. Keep it going to the next season?

Show is enjoyable watch it every week. Keep it going.

I’m enraptured with the Vikings show. I’d be devistated if there wasn’t a season six or beyond! Please don’t disappoint it’s true fans.

I really do enjoy the show. Roll is on the way back. I hope to see what happens now

yeah same here, not too long left to see, if you want to some trailer and info see here. https://ukreleasedates.co.uk/vikings-season-6-episode-1-uk-release-date/
not too particularly in love with Rollo, but suppose after Ragnar is gone he will have to do 😛 If we take history into account Bjorn, Ivar and Rollo will play a big part 😛 william the conquerror seems to be a grandchild of Rollo so wonder if they will go that far with the series

I really like the show I hope they keep it on. I do miss seeing Ragnar Lothbrook but I also like to see Bjorn Ironside.

Yes I’m psyched! LOVE this show ! They’re ratings only declined because everyone is watching online no one has cable anymore lol Thanks for posting this!

Love the show. One criticism: Alex Andersen is too melodramatic playing Ivar.

While Travis as Ragnar was a huge draw, it has to be mentioned the other cast members who portray characters still have stories to tell us. I for one look forward to the rest of the stories.