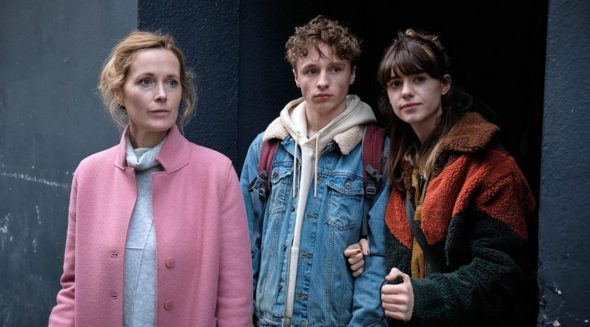 War of the Worlds is returning. The sci-fi drama series has been renewed for a second season and the show will be the first UK scripted series to resume production amidst the COVID-19 pandemic.

Based on the H.G. Wells novel, the War of the Worlds series begins as astronomers detect a transmission from another galaxy and this serves as definitive proof of intelligent extraterrestrial life. Within days, mankind is all but wiped out by a devastating attack and pockets of humanity are left in an eerily deserted world. The cast includes Gabriel Byrne, Elizabeth McGovern, Léa Drucker, Adel Bencherif, Emilie de Preissac, Natasha Little, Daisy Edgar-Jones, Ty Tennant, Bayo Gbadamosi, Stephen Campbell Moore, Stéphane Caillard, and Aaron Heffernan.

According to Deadline, production on season two will begin this Monday in Newport, Wales.  Producers have put together a very detailed document of protocols that will be followed by the cast and crew. Measures include regular temperature tests, color-coded bands (to identify areas that various members of the production can and cannot access), COVID tests, quarantines, and social distancing.

“Fortunately, we are a show which is in a world where there aren’t that many people around. There are things that work for us creatively,” said director Johnny Capps. “War of the Worlds is all about man’s humanity and what you do in an extreme crisis. That’s what I’ve found really interesting about the pandemic and the way people are behaving. Season two will touch even more nerves because of what we’ve been through as a country and as a world.”

The first season of the international series aired on EPIX in the United States. The cable channel has not announced they’ll be airing season two yet but, given that the show reportedly performed very well for EPIX, a pick-up is expected.

What do you think? Have you seen War of the Worlds? Will you watch season two of this sci-fi series?

I,also, subscribed to Epix just to watch this show. It’s worth every penny.

Please continue this show. I really enjoyed watching it and recorded it on my DVR. I’m very curious as to why the machines aliens kept taking the babies. Also what the human alien person was hooked up to machines in the Alien ship. So, come on with Season 2 PLEASE!

Awesome, I really loved this adaption of War of the Worlds. Every actor/actress were great, screenplay was awesome. I really hope we are able to view it in the United States.

Yes, I would definitely watch!!

I AM VERY HAPPY THAT SEASON 2 OF WAR OF THE WORLDS WILL BE MADE!! LOVED THE SERIES!! LOOKING FWD TO THE NEXT SEASON!!

Oh… I so look forward to watch. I loved it!

I am really looking forward to season 2. We subscribed to Epix just to see War of the Worlds.

Same here, that’s actually the only show I watched while subscribed to Epix.

I am crazy about this season…and the sergeant!

I wish I could see the show but I don’t get Epix.

I wish I could see the show but I don’t get Epix. Sorry I’ll wait for it to go to Amazon prime

Abe
Reply to  I wish I could see the show but I don’t get Epix.

Get the free subscription and watch the show.

This was a great show, well done and exciting…. I was able to see it during a free time that Epic was free on Spectrum

Very good show. My one squabble is the subtitles are too small when the French characters speak. Great story and acting !

Absolutely will watch Season two of war of the worlds!