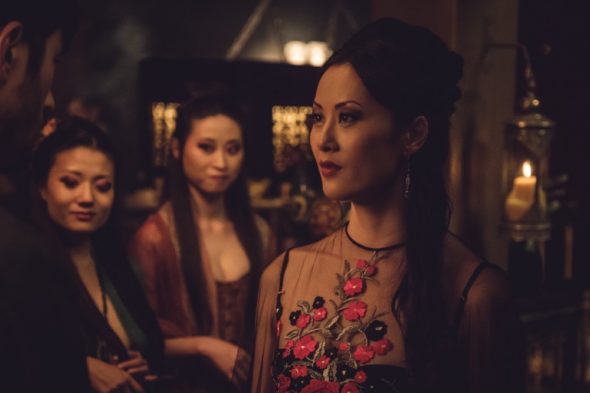 Cinemax is heading back to San Francisco. The network just announced they’ve renewed Warrior for a second season.

Based on the writings of Bruce Lee, the historical drama “kicks off in San Francisco’s Chinatown, in the year 1878, during the Tong Wars. The tongs were Chinese organized crime factions.” The cast includes Andrew Koji, Kieran Bew, Olivia Cheng, Dianne Doan, Dean Jagger, Langley Kirkwood, Hoon Lee, and Christian McKay.

Although Warrior has not been a huge ratings success since it debuted earlier this month, it has garnered critical praise. So far, the Cinemax series is averaging a .03 rating in the 18-49 demo and 139,000 viewers.

Following the show’s April 5 premiere, the CINEMAX drama series WARRIOR has been renewed for a second season, it was announced today by Len Amato, president, HBO Films, Miniseries and CINEMAX Programming.

“Bruce Lee’s vision is alive and well,” noted Amato. “WARRIOR combines high-energy martial arts with wit and brains. We’re thrilled to renew such a great show for a second season on CINEMAX.”

WARRIOR is a gritty, action-packed crime drama set during the brutal Tong Wars of San Francisco’s Chinatown in the second half of the 19th century. The series follows Ah Sahm (Andrew Koji), a martial arts prodigy who emigrates from China to San Francisco under mysterious circumstances. After proving his worth as a fighter, Ah Sahm becomes a hatchet man for the Hope Wei, one of Chinatown’s most powerful Tongs (Chinese organized crime family).

Among the critical raves for the current season, which airs Fridays (10:00–11:00 p.m. ET/PT) on CINEMAX, Rolling Stone called the show a “lush action drama” where “the legend becomes fact in an unexpected, wonderful way with all of the bells and whistles of modern TV,” while IGN praised WARRIOR for its “efficient, energetic, and enjoyable [ability to bring] American history to vivid life with verve, intelligence, and memorable fists of fury” and “thoughtful political edge,” and Mashable described it as “triumphant” and “a victory.”

What do you think? Have you seen Warrior? Will you watch season two?

Its really different and I loved it!!

I just heard about the Warrior tv show based on the writings of Bruce Lee. I have not seen it yet but am very interested & looking forward to watching it.

Please keep the episodes coming and going because its inspiring to see other asian action heroes for me and asian community. I love it and want to know when the second season comes out comment back if you know thank you.

Yes, my wife and I definitely enjoyed watching Warrior. The story line was definitely in sequence with those times. We are big fans of Bruce Lee movies. Keep up the good work. We are looking forward to season 2. Any target date to put on our calendar?

Looking Forward To Season 2, I Found the Program to be Excellent in Every Respect. Waiting For Season 2 to Begin.

Warrior is bad ass! Every episode was pure adrenaline! I can’t believe I never heard of this show. Good thing Roku recommended it as I am hooked! Like a cross between Gangs of NY & Sopranos. Great Action Drama!!! Great diverse cast too!

I watched Warrior from the first to the last episode, and I have to say that I couldn’t get enough. It was not the run-of-the-mill chop-socky kung fu movie. The production and sets were excellent, as well as the historical characterization. It didn’t hurt to add a modern touch as well. The characters and how they intertwined were juicy. And the martial arts was OUTSTANDING!!!

Okay, Please, please let this show have a long run. What can’t I say about this awesome action packed, thrilling, violent, drama filled fight show. Everybody is beautiful! The costumes are magnificent. And the fact that the foreign language is spoken in english for (audience) our benefit…wow! Genius.

Iris
I’m hooked. This show is brilliant and awesome. I need more seasons of viewing to happen. To everyone involved in the making of this show “Congratulations” I Love it!!!!!!