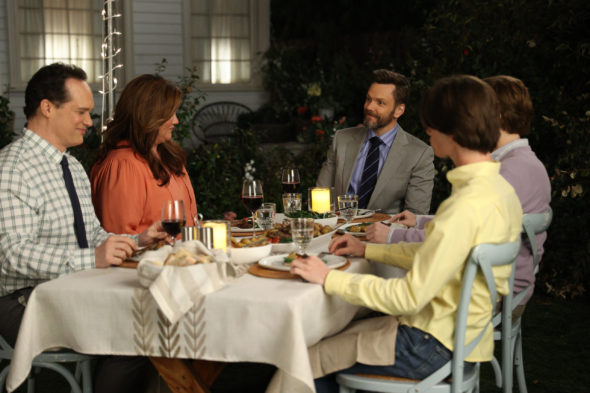 American Housewife was cancelled by ABC on Friday, and the cast has now reacted to the series not getting a sixth season. Katy Mixon, Diedrich Bader, Meg Donnelly, Daniel DiMaggio, Giselle Eisenberg, and Ali Wong star in the comedy series which follows the Otto family as they live in a wealthy town in Connecticut. The last episode of the comedy aired on March 31st.

Check out the posts from the cast of the ABC comedy below.

It was an honor to spend 1 amazing season on #AmericanHousewife -thx to all the fans who gave me a chance, to the rest of the cast, writers, directors & all the crew who worked so hard through Covid &😷 to bring laughter to viewers every week. We’ll meet again in another life 💕

My last tweet about #AmericanHousewife. Sad to see it come to an end. Thanks to the cast, hardworking crew and most importantly… you guys. “Oliver Out🎤”

can’t even think of words right now at all. guess for now, i want to thank all of u 4 watching, even w our endless time slot switches 😭 everyday on set of #AmericanHousewife was pure magic. i can’t fathom i won’t be going home to Stage 23 anymore. we love you so much. thank you.

So sad to hear today that this awesome show will not get a farewell season.😢 📺 💔
I only had a chance to do a handful of episodes but boy were they fun! Congratulations on an excellent run, guys! Thank you cast and crew for welcoming me so warmly🙏🏽 A BLAST!#AmericanHousewife pic.twitter.com/Xv9fKuxpS5

Patricia Heaton, star of another ABC comedy The Middle, also shared her thoughts about American Housewife’s cancellation on social media.

Shoutout to my friends on #AmericanHousewife. Great group of hilarious and lovely people. It’s tough – there are no guarantees, even on a successful, highly- rated show. It’s unfair they don’t get a proper send-off, but that’s showbiz, as they say.

What do you think? Are you upset by the cancellation of the American Housewife TV show on ABC? Were you hoping for a sixth season renewal?

I just saw that it was canceled. This is upsetting !! I really enjoy the show .what is the reason? Was it because of the new cast characters? Is it because kids got too old ?

Will miss this show
All the good, decent shows get cut way too quickly

Very disappointed that this show is ending!!!

Once again you cancelled a great show!!

I loved this show. It got me to appreciate History. And semi abnormal family quirks.
And Cooper Bradford!!! (It figures you’d yank it… Not happy).

I enjoyed the show , but they will put something stupid on instead

I am so sad to see the show close, it was a bit of fresh air compared to some of the shows that are being kept. I looked forward to the feel good show every week. Sure wish they would have a change of heart. Thank you for bringing smiles to our house, you will be missed.

I am sitting here in awe & shock attempting to comprehed what took place. Obviously, the 3 other television shows were finally put out of our misery. This vehicle for the Otto family was a great fresh take on the family dynamic and showcasing the bright new faces to series comedy. I will defenitly follow this comidic family story to any channel.

Only show that we watched as a family. Hilarious! Superb cast! Please reconsider!

Boo! Bring back American Housewife! I love this show, the cast is hilarious and keeps me laughing! WRONG choice to cancel! You always cancel the good shows!

I love the Ottos! This was the funniest and most heart warming show on TV! I will miss them very much.

So sad that American Housewife was cancelled. We watched every week in every time slot it was moved to. Don’t understand this, but ABC thinks that Home Economics deserves a renewal. Sorry to say, but that show is painful to watch and we stopped watching after the first show.

American Housewife was my fav. I’ve watched every episode a few times on Hulu. Someone needs to recount the votes. This one should not have been cancelled!!!