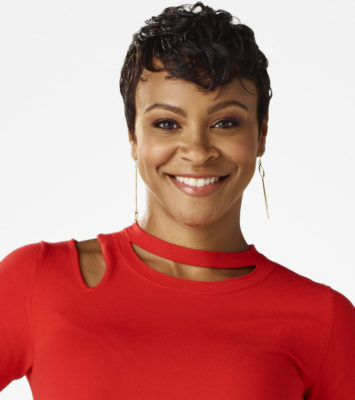 Another member of the American Housewife cast has departed the ABC comedy series.  Earlier this year, original cast member Julia Butters left the series, and now, Carly Hughes has departed.

American Housewife stars Katy Mixon, Diedrich Bader, Meg Donnelly, Daniel DiMaggio, Giselle Eisenberg, and Ali Wong. The sitcom centers on Katie Otto (Mixon), a confident and unconventional mother from the wealthy town of Westport, Connecticut. Katie wants to “keep it real” stand apart from her community’s “perfect” parents and their entitled children. Katie’s logic-driven husband, Greg (Bader), supports her efforts as best he can. Together, they try to make sure that their three kids — headstrong Taylor (Donnelly), snarky Oliver (DiMaggio), and obsessive-compulsive Anna-Kat (Eisenberg) — understand their family’s old-fashioned values, so they don’t end up carbon copies of their neighbors.

Butters opted to leave the family comedy series ahead of the start of season five. The actress had played youngest daughter Anna-Kat Otto and that role was recast with Giselle Eisenberg (Life in Pieces). Director Quentin Tarantino had seen Butters on the ABC sitcom and cast her in the Once Upon a Time In Hollywood feature film.  Butters earned acclaim and award nominations for her role. This opened numerous doors for the actress and she and her team wanted to pursue them so the studio granted her request to leave the series.

Hughes, who plays neighbor Angela, is another story. According to Deadline, Hughes has left the show and alleges a toxic work environment and discrimination as the reasons. The actress left at the end of season four. She appears in the fifth season premiere because it was supposed to be part of season four and some of the filming had been completed ahead of the March shutdown.

“I was no longer able to work in the toxic environment that was created on American Housewife,” Hughes said in a statement to Deadline. “I made the decision to leave to protect myself from that type of discrimination. As a black woman in entertainment, I feel the responsibility to stand up for what I deserve, what we all deserve — to be treated equally. I wish the show well, and I am excited for a new chapter and to be able to pursue the opportunities ahead.”

A spokesperson for the show said, “Carly was a valued member of the cast, and we had hoped she would return to the show this season. … The concerns she raised led to positive changes to the workplace and improvements to the culture, but we respect the decision she made to move on. We wish her nothing but the best.”

It was recently revealed that Holly Robinson Pete has joined the series in a newly-created role.

What do you think? Do you watch the American Housewife TV show on ABC? Are you sorry to hear that Hughes won’t be returning?

So they are canceling the family shows but renew the Bachelor and shows like that and other ridiculous sex drunken filled shows. This show was funny .

This past season of AH was terrible!! I can’t believe how much Anna cat actually made this show. Now with this new girl playing her part it has really kind of ruined things. The whole vibe of the show has really changed alot

ABC sucks for cancelling this hilarious show. Almost as good as The Middle!

I love this show. Writing is great.

I’m sorry to hear this. I liked her character.

Julia Butters was very good indeed on AH. Give her replacement time & more of a role & she will do well too. A very gifted young actress who was great in Life in Pieces!

The original actor who played Anna Katt(Butters) was a big reason why I never missed an episode of American Housewife. I still watch the show but I hope they come up with something huge that can replace Miss Butters’ talent.
Thank you.