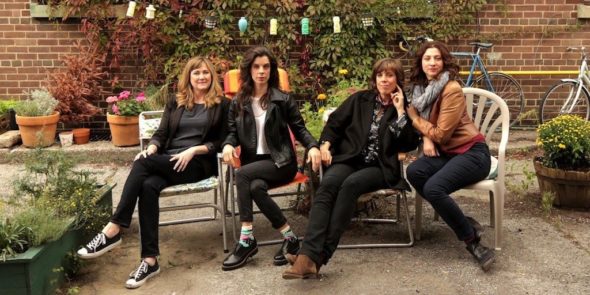 Baroness von Sketch Show is back for round three. Today, IFC announced season three of the TV show will premiere in 2018.

The Canadian sketch show features an all-female cast and “celebrates the absurd and mines the embarrassing, offering a witty take on everyday problems.” The series is written and performed by Meredith MacNeill, Aurora Browne, Jennifer Whalen, and Carolyn Taylor.

Season three of Baroness von Sketch Show is set to debut on IFC in 2018. Filming is currently underway.

NEW YORK – October 25, 2017 – IFC announced today that it has acquired Season 3 of the all-female, sketch comedy series Baroness von Sketch Show. The network acquired Seasons 1 and 2 earlier this year from Banijay Rights, debuting both back-to-back this summer to strong critical acclaim. The Season 2 finale airs tonight at 11:00PM. Filming of Season 3 of Baroness von Sketch Show is underway in Toronto, Canada and new episodes will air on IFC in 2018.

“Carolyn, Meredith, Aurora and Jennifer have a devotion to red wine, dry shampoo and smart, relevant comedy that made us fall in love with their show the minute we saw it,” said IFC President Jennifer Caserta. “The ladies have set a high bar as the first and only all-female sketch comedy troupe that also writes, produces and stars in their own show, so we are especially proud to bring their third season to the IFC audience which has clearly demonstrated they want more!”

Hailed as “fabulous” by The New York Times and “the best thing to come out of Canada since Ryan Gosling” by Vogue, Baroness von Sketch Show provides a fast-paced, satirical look at everyday lives. The female-based sketch comedy series, performed and written by Meredith MacNeill and award-winning Second City alumni Aurora Browne, Jennifer Whalen, and Carolyn Taylor, celebrates the absurd and mines the embarrassing, offering a witty take on everyday problems.

Each episode of Baroness von Sketch Show tackles both outrageous and totally relatable subjects as moms at a soccer game, marketing directed at women, office birthday parties, trying on jeans, women over 40 in the gym locker room, bachelorette parties and the phenomenon that is dry shampoo.

Baroness von Sketch Show is executive produced by Jamie Brown, Taylor, MacNeill, Browne and Whalen. Taylor also serves as showrunner. The series is produced by Frantic Films and originates on the CBC in Canada. It is distributed internationally by Banijay Rights. Season 3 will air on the CBC in 2018.”

What do you think? Are you a fan of Baroness von Sketch Show? Will you watch the new season?

I love love this show!

I was hooked from the first episode! I never watch with out chuckling a time or two, or three! One skit from Season 2; Ep. 6 that had me laughing out loud. It was the one where two cast members are fighting over who is picking up the tab for dinner. I am often in this same situation with a friend of mine! I’ve just never been threatened to have the money shoved between my “big beautiful sweaty titties”! I hope she doesn’t see this. Can’t have her getting any ideas! I would love to know if/when the show is… Read more »

I am a huge fan and cannot get the word out fast enough to all my friends. I was smitten with the creative genius of the show from the first moments I watched. Thanks to my husband’s never ending curiosity to try new things, we have now spent many happy hours laughing until our sides are splitting. We have watched all 13 episodes and are now rewatching episodes. Thank you!