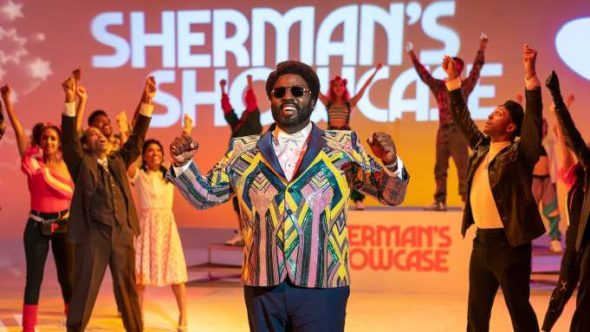 Get ready for more of Sherman’s Showcase. The series has been renewed for a second season, and it will air on both AMC and IFC. This news comes just before a special for the series airs on Friday. The variety TV show, which features sketches, cultural nostalgia, guest stars, and original award-winning songs, was created by Diallo Riddle and Bashir Salahuddin. They both star in the series.

The pair said the following about the renewal of the IFC series:

“Sherman McDaniels has been a staple in American culture for almost 50 years and shows no signs of slowing down…or aging at all. We’re thrilled to return to the uniquely nerdy, quirky, silkily soulful and musical world of Sherman’s Showcase. It’s all our favorite things and now it’s on AMC and IFC. Season 2’s so big, it needs two networks.”

Sarah Barnett, President of AMC Networks Entertainment Group and AMC Studios also spoke about the series. She said the following:

“It’s rare today for a show to develop a highly passionate fanbase, get raves from critics and infiltrate popular culture.  Sherman’s Showcase has done all three and we’re thrilled to put it in front of AMC audiences alongside IFC’s devoted fans.  Bashir and Diallo are fantastically talented, we are all waiting with baited breath to collectively witness the continued evolution of Sherman McDaniels, American icon.”

What do you think? Are you a fan of the Sherman’s Showcase TV series? Will you be watching season two?