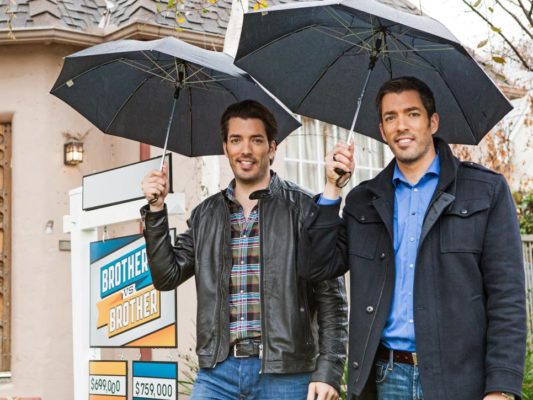 The Scott brothers are back. Recently, HGTV announced production has begun on season six of Brother vs. Brother: Jonathan vs. Drew.

The new season will take place in San Francisco and follow Jonathan and Drew Scott “as they each compete to renovate and sell a home in the Bay Area’s hot real estate market.” Season six of Brother vs. Brother is slated to debut this May.

Read more info from HGTV below:

NEW YORK [Feb. 9, 2018] HGTV superstars Jonathan and Drew Scott will rev up the sibling rivalry as they begin production on a new season of the top-rated real estate and renovation competition series Brother vs. Brother: Jonathan vs. Drew. Set in the suburbs just outside stunning San Francisco, season six will feature the popular twins – who also star in the Emmy®-nominated series Property Brothers – as they each compete to renovate and sell a home in the Bay Area’s hot real estate market. Each week, Jonathan and Drew’s big brother, JD Scott, will referee the competition, along with help from special guest celebrity judges. All proceeds from the sale of the two homes will go to a local charity. During its previous run, Brother vs. Brother: Jonathan vs. Drew attracted more than 12 million total viewers and was the #2 cable show among upscale women 25-54 for its timeslot. The new six-episode season is slated to premiere in May.”

What do you think? Are you a fan of Brother vs. Brother? Will you watch the new season?

I love watching HGTV and Property Brothers is one of my all time favorites. Drew and Johnathin are tops at whatever they do ~ Brother against brother is a ‘special’ part of their series!! I hope their shows continue for a LONG time!!

I absolutely LOVE Property Brothers. It’s one of the very best shows on HGTV.

Sounds GREAT but I have a challenge for the wonderful Scott brothers for the next one. Go to the comeback city of America…DETROIT, and renovate two houses there. I am so surprised how Detroit is rallying when we attended a wedding there this past year. What a boost that could be for the city of Detroit and an encouragement for more people to invest in it.