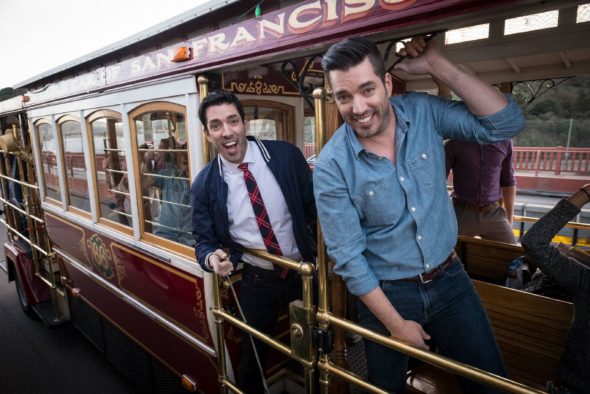 The Scott brothers are battling it out again. Recently, HGTV announced season six of Brother vs. Brother: Jonathan vs. Drew will premiere in May.

The new season will see Jonathan and Drew Scott bring their home renovation skills to the suburbs of San Francisco. There, they’ll have six weeks “to buy, transform and sell two unique homes in the Bay Area’s hot real estate market, the brother who earns the highest net profit will claim victory.”

Season six of Brother vs. Brother: Jonathan vs. Drew premieres on HGTV on May 23rd at 9 p.m. ET/PT.

New York [March 19, 2018] Massive renovations, daunting dares and a battle to win the ultimate sibling rivalry are on the line as HGTV superstars Jonathan and Drew Scott return for a new season of Brother vs. Brother: Jonathan vs. Drew, premiering on Wednesday, May 23, at 9 p.m. ET/PT. Set in the San Francisco suburbs, the new six-episode season of HGTV’s popular real estate and renovation competition series will be a hyper-test of the twins’ reno know-how. With just six weeks to buy, transform and sell two unique homes in the Bay Area’s hot real estate market, the brother who earns the highest net profit will claim victory. Each week, older brother JD will serve as the referee for the home renovation challenges, while guest stars from HGTV or DIY Network will evaluate and choose their favorite design.

“I’m still basking in the glory of last season’s win,” said Drew. “Jonathan knows I can beat him again so he better bring his A game.”

“I’m not going to lie – losing to Drew wasn’t fun,” said Jonathan. “This year’s competition is going to be more intense than ever and I’m definitely not letting him win again.”

The weekly challenge loser in the fierce flipping competition will complete unpleasant dares such as cleaning out the giraffe moat at the Oakland Zoo and stomping a barrel of sticky grapes in Napa. On the other hand, the challenge winner will live it up as he gets to visit—and name—a baby wallaroo in a private zoo tour and enjoy a gourmet meal and VIP wine tasting while overlooking a picturesque vineyard.

Brother vs. Brother: Jonathan vs. Drew is produced by Scott Brothers Entertainment, with Jonathan and Drew as executive producers. The New York Times best-selling authors also star in HGTV’s Emmy®-nominated series Property Brothers. Fans can visit HGTV.com/Brothers each week for before and after photo galleries of the duo’s finished spaces and exclusive videos and also can interact via social media using #BroVsBro.

All proceeds from the Brother vs. Brother: Jonathan vs. Drew home sales will go back to local communities via Rebuilding Together—a national U.S. non-profit organization that preserves affordable homeownership and helps to revitalize neighborhoods by providing free home repairs and modifications to low-income homeowners.

What do you think? Have you seen Brother vs. Brother? Will you watch the new season?

This Year the BEST EVER. YEAR!! Jonathan s house curb appeal
INSANE. STUNNING WOW!!!! FACT ITS SOLAR ECO FIENDLY
New. Owners got a steal!!!!! Great work. Both brothers and JD for putting up with it !! This is by FAR. Your BEST SHOW YOU GUYS DO !!!