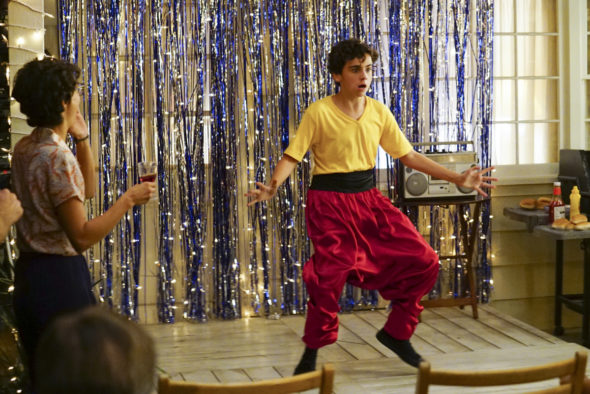 Things aren’t looking too good for Alex at any age. CBS has pulled its Me, Myself & I TV show from the schedule, replacing it with 9JKL and adding the second season of Matt LeBlanc’s Man With a Plan. This is yet another sign that Me, Myself & I is cancelled, although the network says it will return to the schedule “…at a later date.” There were already indications the Tiffany Network was disappointed with the freshman comedy’s Nielsen ratings performance. Back on October 25th, they switched Superior Donuts into the 9:00pm timeslot and moved Me, Myself & I to 9:30pm.

A CBS sitcom, Me, Myself & I stars Bobby Moynihan, Jack Dylan Grazer, Brian Unger, Jaleel White, Kelen Coleman, Christopher Paul Richards, Mandell Maughan, Skylar Gray, Reylynn Caster, Sharon Lawrence, and John Larroquette. It centers on the defining moments in the life of Alex Riley — in 1991 at age 14 (Grazer); in 2017, at 40 (Moynihan); and in 2042, as 65-year-old (Larroquette).

Me, Myself & I: A Look at the Ratings

The first season of Me, Myself & I is averaging a 1.01 rating in the 18-49 demographic and 4.96 million viewers. Amongst the other CBS TV shows, Me, Myself & I currently ranks 13th when sorted by its demo ratings and 17th in terms of total viewership.

According to Deadline, CBS will complete its 13 episode production order for Me, Myself & I. Still, it is not clear when they will air, and the network is unlikely to order a full season.

CBS Pulls Me, Myself & I; Retools Monday Night Lineup

CBS has issued a press release, announcing the new Monday night schedule. Check it out.

SECOND SEASON OF “MAN WITH A PLAN” TO PREMIERE MONDAY, NOV. 13 ON CBS

CBS announced today the comedy series MAN WITH A PLAN starring Matt LeBlanc will premiere its second season Monday, Nov. 13 (8:30-9:00 PM, ET/PT) on the CBS Television Network. Freshman comedy 9JKL moves to 9:30-10:00 PM, ET/PT on Nov. 6. ME, MYSELF & I will return to the schedule at a later date.

About MAN WITH A PLAN

What do you think? Are you a fan of the Me, Myself & I TV series? Should it be cancelled or renewed for season two on CBS?

Not surprising they’d get rid of the best new sitcom to come along in a long time. This is why CBS has only 2 other sitcoms worth a crap, Big Bang, and I guess Mom is not bad. MM & I is so original and well-written. That 9JKL Apt BS is beyond stupid, every forced ‘ba-dum-bump’ insults your intelligence.

All four Monday so called ‘comedies’ are bad; Kevin can wait, Superior Donuts, 9JKL and Man with a plan. Time to start anew CBS

It would be a shame to lose MM&I so early. This is a nice family show with a mostly original and at least entertaining concept, and we’ve been enjoying it. No offense to Matt LeBlanc, but replacing it with Man is NOT an improvement. In fact, MM&I is the best of a pretty average to bad lineup. 9JKL is fairly harmless but rather like eating whipped cream: no substance and leaves you just as empty as before. I stopped watching Kevin this season, and I wouldn’t missing Superior Donuts if I never saw it again. I hope CBS pulls their… Read more »

My husband and I love this show. It is different and love the actors. They always cancel the shows we like.

I love this show! Man with a plan is just Bad!!!

another terrible idea by CBS 9JKL is awful compared to me, myself and I..
Man with a plan is another dog that won’t hunt… horrible programming move now Monday nights on CBS is great for insomniacs. What does Matt Leblanc have on CBS to deserve a second year????

same should be asked about KCW.

I love Me, Myself, & I. Can’t get into 9JKL or Man With A Plan. Also can’t get into Kevin Can Wait, since the wife was killed off.

Aunt Fifi
Reply to  Bill B.

I love Kevin Can Wait without the wife, never thought it was a good fit.

I love this show, they should at least give it a chance.

I love Me, Myself and I, and am sorry to hear that it’s already being cancelled. Great concept, enjoyable story lines and great talents … What a shame to lose it.

CBS is foolish for this without having tested the show in an earlier time slot — or scheduling it there in the first place.

That sucks.. It’s a great family show. Maybe it works better on a different night. But a great show. Matter fact the only show that allseven of us can agree on to watch together. Very sad.

Sad that “Me, myself & I” has been pulled. Oh well. I guess my husband and I are not the right demographic.

That really is too bad. This is really a good show, so much better than Man with a Plan, which is just mindless television. I guess the problem is that it is the kind of show, you have to actually pay attention to or you miss the point of the show. I can see why it would be difficult for some people to watch when their smart phones and tablets are in front of them.

I haven’t watched ‘Me, Myself, and I’ but I guarantee you it’s better than ‘Man with a Plan’. That show makes me feel so bad for Matt LeBlanc

Me, Myself & I is such a funny, tender, amazing show. It’s so cleverly written; three story lines which all come together. It’s wonderful. The other sitcoms you’ve chosen to keep are pedantic, ordinary, not special at all. You clearly haven’t given MM&I enough time to find its audience.