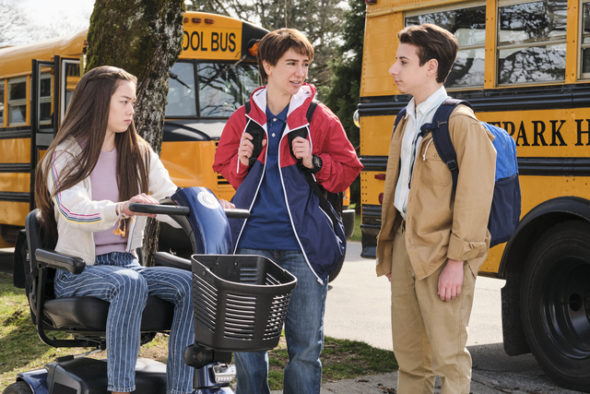 This kid is graduating to a sophomore year on TBS. The cable channel has renewed the Chad TV series for a second season.

Airing on Tuesday nights, the first season of Chad averages a 0.18 rating in the 18-49 demographic and 590,000 viewers in the live+same day ratings.

The renewal isn’t much of a surprise since the series landed a sizable tax incentive to move production to California for season two.

What do you think? Have you enjoyed watching the Chad TV series? Are you looking forward to the second season of this TBS show?

Love, love, love ❤️ this show. For all the haters out there … you obviously do not remember your teen years and forget it’s just a show. Who cares what sex the lead character really is.

I remember mine pretty well

I love the show. Glad its being renewed

People are getting waaay too hung up on who is playing what part… the comedic portrayal of a teen trying so hard to fit in is so cringeworthy it’s hilarious. The writing is sharp if you listen closely to the lines Chad delivers. Definitely not for everyone bc it’s not a straightforward, traditional comedy. I gave it a chance and watched a few then got hooked. Really happy it got renewed. (And yes, I also agree there are plenty of other shows being canceled that shouldn’t have been.)

I thought this show was stupid and not believable. How can a woman of this age act like a highschool boy. Sorry it is coming back

It’s my favorite show this season. I’ve always loved Nasim’s work on SNL. I truly was not aware she played Chad until after the end of the 2nd episode. It’s adorably charming & I’m thrilled it’s been renewed!!!

I cannot believe this show has been renewed!! I could name many other shows that were cancelled that were 100% better. This show is not funny at all. Its boring and stupid. Whoever decided to renew this show needs to have their head examined and drug tested. Will not be watching!!

Very surprised this show is coming back for a second season. Very bad, unfunny show. Actually cringeworthy. Won’t be watching. Who’s driving the bus at TBS?

Not very good. Two thumbs. I give it 3 thumbs down if I had an extra digit.

I’d like a gram of whatever is being smoked by the exec’s who thought this needed a season 2.

It just goes to show, it does not matter the quality, just the tax incentives or who you know or both. This show is the opposite of entertaining.

Am I the only one who doesn’t get how a 40 something year old woman playing a 14 year boy is supposed to be “funny”??

As Michael Jackson once sang: you are not alone.