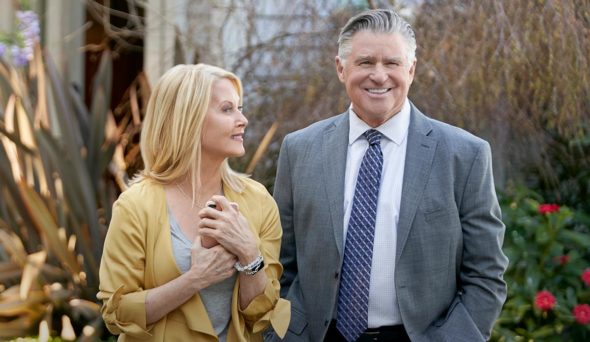 Will Abby find a love that lasts in the fifth season of the Chesapeake Shores TV show on Hallmark Channel? As we all know, the Nielsen ratings typically play a big role in determining whether a TV show like Chesapeake Shores is cancelled or renewed for season six. Unfortunately, most of us do not live in Nielsen households. Because many viewers feel frustrated when their viewing habits and opinions aren’t considered, we invite you to rate all of the fifth season episodes of Chesapeake Shores here. *Status Update Below.

A Hallmark Channel Canadian-American drama, the Chesapeake Shores TV series stars Meghan Ory, Treat Williams, Diane Ladd, Robert Buckley, Barbara Niven, Laci J. Mailey, Emilie Ullerup, Brendan Penny, and Andrew Francis. Jesse Metcalfe guests. The store explores the lives of the O’Brien family, after the homecoming of eldest daughter Abby O’Brien (Ory), a high-powered career woman and divorced mother of two. Over the past few seasons, Abby has leaned on her family to strike a balance between her professional and personal lives. This season will see her coming into her own as her father Mick’s (Williams) new business partner and facing a new challenge when successful and eccentric entrepreneur Evan McKenzie (Buckley) brings a new development project into town.

What do you think? Which season five episodes of the Chesapeake Shores TV series do you rate as wonderful, terrible, or somewhere between? Do you think that Chesapeake Shores should be cancelled or renewed for a sixth season on Hallmark Channel? Don’t forget to vote, and share your thoughts, below.

*3/29/2022 update: Hallmark has renewed Chesapeake Shores for a sixth and final season.

Great series with great writing and acting. I am especially impressed with Laci Mailey! She is the absolute best! Fruitvale BC is proud of her!