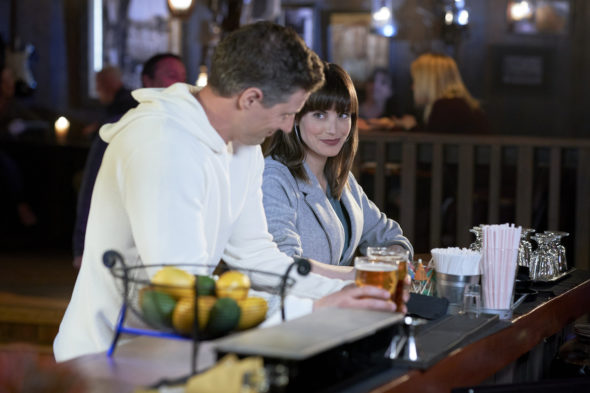 Are viewers ready for Abby to move on? Has the Chesapeake Shores TV show been cancelled or renewed for a sixth season on Hallmark Channel? The television vulture is watching all the latest cancellation and renewal news, so this page is the place to track the status of Chesapeake Shores, season six. Bookmark it, or subscribe for the latest updates. Remember, the television vulture is watching your shows. Are you?

Airing on the Hallmark Channel cable channel, the Chesapeake Shores TV series stars Meghan Ory, Treat Williams, Diane Ladd, Robert Buckley, Barbara Niven, Laci J. Mailey, Emilie Ullerup, Brendan Penny, and Andrew Francis. Jesse Metcalfe guests. The store explores the lives of the O’Brien family, after the homecoming of eldest daughter Abby O’Brien (Ory), a high-powered career woman and divorced mother of two. Over the past few seasons, Abby has leaned on her family to strike a balance between her professional and personal lives. This season will see her coming into her own as her father Mick’s (Williams) new business partner and facing a new challenge when successful and eccentric entrepreneur Evan McKenzie (Buckley) brings a new development project into town.

The fifth season of Chesapeake Shores averaged a 0.10 rating in the 18-49 demographic and 1.46 million viewers. Compared to season four, that’s down by 46% in the demo and down by 14% in viewership in the live+same day ratings (including DVR playback through 3:00 AM). While these numbers don’t include further delayed or streaming viewing, they are a very good indicator of how a show is performing, especially when compared to others on the same channel. There can be other economic factors involved in a show’s fate, but typically the higher-rated series are renewed and the lower-rated ones are cancelled. Find out how Chesapeake Shores stacks up against other Hallmark Channel TV shows.

Will Hallmark Channel cancel or renew Chesapeake Shores for season six? Metcalfe is exiting the show after four seasons and his and Ory’s onscreen relationship has been a big part of the series. Can the show survive without that? I’m thinking the ratings will take a hit but that they’ll still be good enough for the show to be renewed.  I’ll update this page with breaking developments. Subscribe for free alerts on Chesapeake Shores cancellation or renewal news.

3/30/22 update: Chesapeake Shores has been renewed for a sixth and final season.

What do you think? Are you glad that the Chesapeake Shores TV show has been renewed for a sixth season? Should this Hallmark Channel TV series be ending?

Can’t wait for season six. The episodes and actors are great. Sad, that it’s the final season. To good of a show to end. Think again and bring on season seven!!!!!

Absolutely love this show, can’t wait for season 6. Hope it doesn’t end there. Great Feel Good series, should be more of them

Wish the season would continue on to even more seasons.