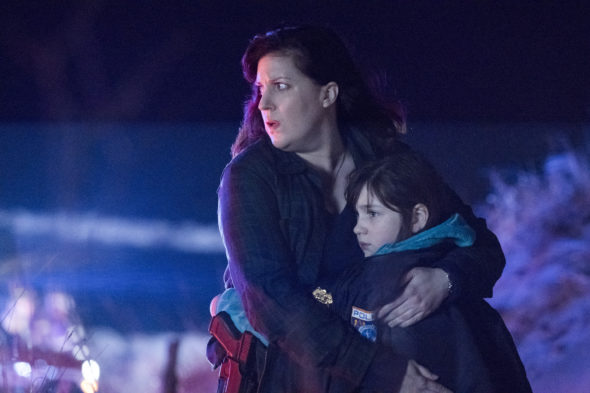 “She doesn’t remember anything.” ABC just released a new trailer for their upcoming TV show, Emergence.

The mystery series “is about a police chief who takes in a young child she finds near the site of a mysterious accident who has no memory of what has happened.” The cast includes Allison Tolman, Alexa Swinton, Owain Yeoman, and Ashley Aufderheide.

A character-driven genre thriller, “Emergence” is about a police chief who takes in a young child she finds near the site of a mysterious accident who has no memory of what has happened. The investigation draws her into a conspiracy larger than she ever imagined, and the child’s identity is at the center of it all.

What do you think? Are you a fan of mysteries? Will you check out Emergence?

Best show in many years. Keep it going.

Great show. Best in many years.

Emergence is a great show and the episodes keep getting better and better. The cast is great and so is the writing. Renew this show please.

I’d just love to see new spins on the legendary formulas that worked. Remakes of *MASH, Cheers, Friends… set in 2019ish. Assemble a new Friends cast of unknowns and assemble the same writers. Borrow writers from the top shows to add unexpected subjects and elements.

I have to add this…if this show turns out to be good and ABC cancels it like they did Forever and The Catch, I will be done with ABC. I am still angry, what…five years later…about Forever and so are a lot of other people!

Didn’t you know? ABC stands for Already Been Canceled

Good one. There are so many good shows that are being cancelled, and then they don’t even give you a proper ending.

I am looking forward to watching this show. I like Manifest and this looks to be even better than that. I hope so. I get tired of the same old comedies, which people watch like a bunch of lemmings. You couldn’t pay me to watch The Conners and shows like that.

Also a fan of Manifest, so have hopes for this one.

I’ll watch it! But like the others I’d prefer an ending, one that doesn’t drag on endlessly and one that isn’t left hanging if the show is cancelled.

Yes, it is very annoying when you are involved in a series and they just cancel. Makes me leary to watch any new serial shows..

No because I’m tired of abc having a program on for one or two seasons & then canceling it after I get into it. Especially if there’s no real end too it.

At least when they cancelled Timeless, they had an added show to end it properly.