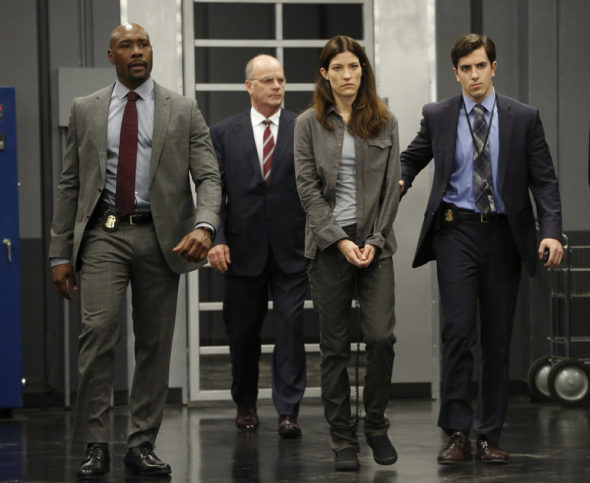 While Rosewood was cancelled by FOX last year, star Morris Chestnut is back with a vengeance. NBC has ordered The Enemy Within TV show to series. The drama features Chestnut as FBI Agent Will Keaton, opposite Jennifer Carpenter, who plays ex-CIA operative Erica Shepherd.

An NBC spy-hunting thriller, The Enemy Within also stars Raza Jaffrey and Kelli Garner. Although Shepherd is now in prison for betraying her country, Keaton finds he must turn to her to track down a new target.

NBC Orders The Enemy Within to Series


America’s fate is in the hands of a traitor. @Morris_Chestnut and @J2thecarpenter star in #TheEnemyWithin, coming soon to NBC. pic.twitter.com/eoUwZEl331

In this fast-paced, spy-hunting thriller, Erica Shepherd (Jennifer Carpenter) is a brilliant former CIA operative, now known as the most notorious traitor in American history serving life in a Supermax prison. Against every fiber of his being but with nowhere else to turn, FBI Agent Will Keaton (Morris Chestnut) enlists Shepherd to help track down a fiercely dangerous and elusive criminal she knows all too well. For Keaton, it’s not easy to trust the woman who cost him so much. While Shepherd and Keaton have different motivations for bringing the enemy to justice, they both know that to catch a spy… they must think like one.

Although the Peacock Network has not issued a press release, the series already has a show page on the NBCUniversal press site.

What do you think? How do you like the sound of The Enemy Within TV series? Do you plan to check out the first season of this NBC TV show?

I LOVE this show!! Nobody could pull off Shepherd more believable than Jennifer Carpenter, she is brilliant….PLEASE don’t cancel this outstanding drama!!

Great acting that pulls one into the story. As the Monday tv shows wrap, this fills a great niche. I think rebroadcasting first few episodes would pull in the target age-market. (I hope so because I can’t stand to watch anymore “reality TV”.)

Sounds like a rip off of the Blacklist but with a female Reddington and a male Keen.

Sounds like a good show, I will be looking forward to it,,

Sounds interesting. Mr. Chestnut is a great actor. We hope they give him good material to work with. We loved him on the FOX show & was disappointed when it was cancelled but it seemed as if it didn’t know where it was going after they caught the woman. Good luck on this one we’ll be watching.

Yes sounds like a great. Show when will the release day