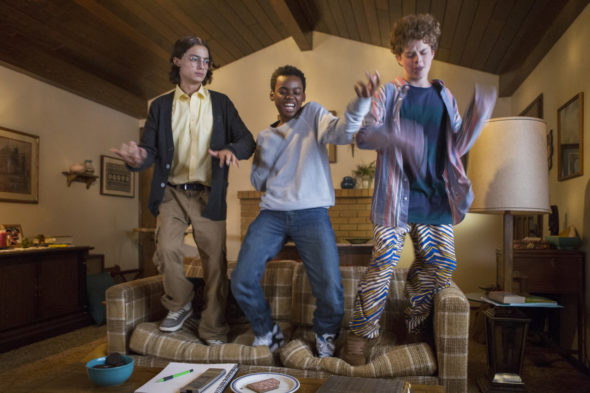 How’s everything? Has the Everything Sucks! TV show been cancelled or renewed for a second season on Netflix? The television vulture is watching all the latest TV cancellation and renewal news, so this page is the place to track the status of Everything Sucks!, season two. Bookmark it, or subscribe for the latest updates. Remember, the television vulture is watching your shows. Are you?

A Netflix coming-of-age dramedy, Everything Sucks! stars Peyton Kennedy, Jahi Di’Allo Winston, Patch Darragh, Claudine Mboligikpelani Nako, Sydney Sweeney, Elijah Stevenson, Quinn Liebling, and Rio Mangini. The period piece kicks off in 1996, in Boring, Oregon. The story centers on high schoolers Kate Messner (Kennedy) Luke O’Neil (Winston), as well as Kate’s dad, Ken (Darragh), and Luke’s mom, Sherry (Nako). Everything sucks, and high school is no exception — for students, teachers, and parents alike. When two groups of outsiders — the A/V and Drama club kids — collide, anything could happen. Even though its the age of VHS, “You can’t fast-forward high school.”

Unless they decide to publicize viewership, it is difficult to predict whether Netflix will cancel or renew Everything Sucks! for season two. Flying blind, I think it will get another season. The time seems right for 90s nostalgia. Since that’s just speculation, I will keep an eye on the trades and update this page with breaking developments. Subscribe for free Everything Sucks! cancellation or renewal alerts.

4/7/2018 update: Well, I did not see this coming. Everything Sucks! has been cancelled after just one short season on Netflix, and I just lost my appetite. Details here.

Peyton Kennedy Is Honestly So Hot and Beautiful

I will be heartbroken if this series doesn’t have a second season. I feel that we’re just getting to know these people and I want to know what happens next!

I just watched this last week and loved it! Such a great show especially if you were a 90s kid.

This was absolutely the best show I have seen on Netflix in a very long time. I even got my son and husband hooked. There had to be a 2nd season!