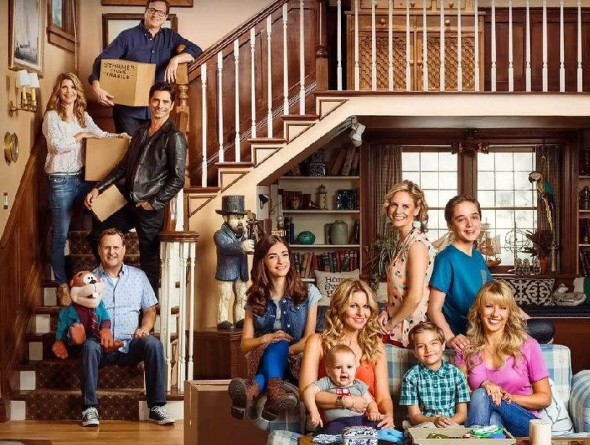 TV show description:
Set in San Francisco, this family sitcom is a follow-up to the Full House sitcom which ran for eight seasons and 192 episodes on ABC.

Her father, Danny Tanner (Bob Saget), is set to move to Los Angeles with his wife Teri (Eva LaRue), brother-in-law Jesse Katsopolis (John Stamos) and Jesse’s wife, Rebecca (Lori Loughlin). Danny and Rebecca are set to host a morning program called Wake Up USA while Jesse will be composing music for General Hospital. Jesse and Becky’s grown twin sons, Nicky and Alex (Blake and Dylan Tuomy-Wilhoit) are in college and plan to open a fish taco truck together.

Danny had planned to sell the family house but instead decides to let DJ and her family live there.

Sister Stephanie Tanner has been working as a traveling disc jockey in London but decides to move back into her old home in San Francisco, to help her sister raise her kids.

DJ’s former boyfriend, Steve Hale (Scott Weinger), is now divorced and hopes to rekindle his relationship with her. Her fellow vet Matt Harmon (John Brotherton) is very interested in her as well.

Series Finale:
Episode #75 — Our Very Last Show, Again
The triple wedding trends toward disaster as one detail after another falls through. But is it a curse — or a sign of big surprises to come?
First aired: June 2, 2020.

What do you think? Do you like the Fuller House TV show? Do you think it should have ended or been renewed for a sixth season?

I would love to see Fuller house renewed ! Finally a funny clean show

I would like to see more episodes of fuller house.

I look love watching this show very sad that it will end after season 5 please keep it for season 6 or more. Did I say I love this show!

Grew up with the show, great to see a sequel and most of the original cast, keep the show it’s awesome

I love this show and it is so good please reconsider renewing it for a new season please.

We love this show my grand children and I.. It is great to see a good clean show that both parents and children can watch

I totally feel it should be renewed i love the show

I don’t think this show should have been canceled!!! I NEVER have liked “Aunt Becky” from day one years ago!!! I just got bad vibes from her that she was just shady!!! And then here we are years later with the college scandal!!! I say get rid of her and let the show go on!!! ☺️

It should continue for so much longer. Its a clean wholesome show and Nextflix needs to reconsider and keep it running for years to come. If Neflix doesn’t then ABC should take it and keep it going on prime time television.

Yes should be cancelled too much Candace Cameron Bure

I find many of many ages from 13 year old to 70 years old find it funny or nice or relaxing. I even ask some and they really want more. I love the show so does my family we watch it together once a week. Would be great if the show last a long time so it takes more time to complete it all over again for good old times.

Fuller house should CONTINUESUALLY BE RENEWED. Between 13-18 episode and a lil longer then roughly 23-26 mins

I think they’re doing well, enjoy the new show, and think it should keep going.

Coming from a single moms perspective having to raise my kids all on my own going through difficult times in our life being in and out of work my kids don’t have their father around. I hope this isn’t the final season of fuller house, as a child I grew up watching full house and never missed an episode. Although the Olson twins neglected their roll of Michelle tanner. I think fuller house is as delightful heart warming as the original show and I am able to enjoy watching fuller house with my children every season. I believe It would… Read more »