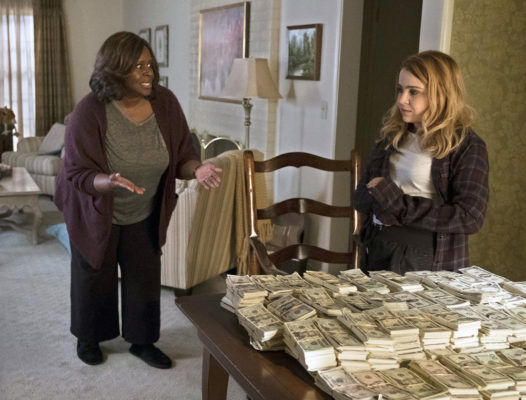 Good Girls just wrapped its first season, but will there be a second? Recently, creator Jenna Bans spoke with TVLine about the future of the NBC TV show.

The comedy-drama centers on three suburban mothers who have been struggling to get by. After a series of setbacks leaves them desperate, they decide to hold up the local Fine & Frugal supermarket, but their take far exceeds their expectations. The cast includes Christina Hendricks, Retta, Mae Whitman, Matthew Lillard, Reno Wilson, Manny Montana, Lidya Jewett, Izzy Stannard, and David Hornsby.

In the interview, Bans revealed season two of Good Girls has already been pitched to NBC and the network seems enthusiastic. Though, no renewal has been announced yet:

We just pitched Season 2 to [NBC’s] Powers That Be on Friday and everyone seemed really engaged and enthusiastic about it.”

And what if the series gets a renewal? What’s next?:

We’re pretty excited about the places we’re taking these three women. It’s a darkly funny mix of the unexpected and also certain things our audience seems to be craving.”

What do you think? Have you seen Good Girls? Would you watch a second season?

We need more Good Girls. please bring it back.

I absolutely love Good Girls. It is so different from other shows and it’s both funny and serious. The acting and writing are great.

I love the show and look forward to it every week!!! I’m surprised by how few episodes we got for season 1!! I’m very critical of comedy shows (yes, it’s also drama), so for me to be laughing, HARD, each and every Monday night over the past weeks says a lot. “Good Girls” is a great concept with fabulous actors who have a lot of natural chemistry. Yes, please bring on another season!!!
Note: I also loved that the Cloud Nine, pseudo-Walmart from NBC’s other show “Superstore” appeared in an episode or two. Haha did any one else see that??

I would ABSOLUTELY watch it. I wouldn’t understand if it got cancelled, it’s SOOOOOO GOOD!

Yes…please renew it. You can’t leave us hanging like this!

This is a great show!! Deals with really life issues and Good Girls GO to action to take care of their children and family! IT has a crazy spin on each episode!!
Please don’t cancel!! I absolutely love it!!!

Please renew!!
Love how the “girls” play off each other

this is a great show, well written full of twists and turns. My husband and I watch together. please renew! Would love to see Rio get a little good girl action.

This is a great show! Please renew it.

PLEASE renew this show!! It is so good. Smart comedy. The actors work together so well and the characters are very relatable. Don’t let this show fall victim to the good ones getting canceled.