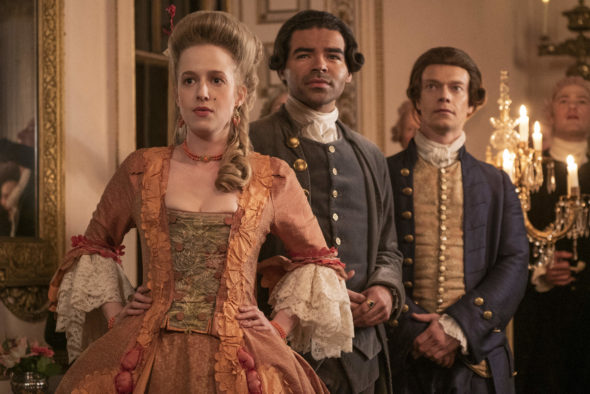 Are the Covent Garden ladies still in business? Has the Harlots TV show been cancelled or renewed for a fourth season on Hulu? The television vulture is watching all the latest TV cancellation and renewal news, so this page is the place to track the status of Harlots, season four. Bookmark it, or subscribe for the latest updates. Remember, the television vulture is watching your shows. Are you?

A Hulu period drama, inspired by the lives of real women, Harlots stars Samantha Morton, Jessica Brown Findlay, Lesley Manville, Eloise Smyth, and Liv Tyler. Alfie Allen joins season three the new pimp in town, Isaac Pincher, with Ash Hunter playing his brother, Hal. The story unfolds in 18th century Georgian London and centers on the Wells family, led by brothel-owning matriarch Margaret (Samantha Morton). The third season kicks off with Margaret having been sent to America in chains, while rival Lydia Quigley (Manville) is in Bedlam. With the help of allies including Lady Fitz (Tyler) the Wells women hope to be free of their mother’s feud. Soon though, Charlotte (Brown-Findlay) realizes running the brothel cultivates enemies.

Unless they decide to publicize viewership statistics, it is difficult to predict whether Hulu will cancel or renew Harlots for season four. This is one of those series that gets some critical acclaim, but seems to otherwise fly under the radar. Without statistics, it is difficult to hazard a guess, but since this wasn’t promoted as a “final season,” I think a renewal is more likely than cancellation. It took four months from the season one premiere to a season two renewal. The third season was picked up just two months after the second debuted, so if good news is in the offing, it seems likely to come within a few months. Since that’s just speculation, I’ll keep an eye on the trades and update this page with breaking developments. Subscribe for free Harlots cancellation and renewal alerts.

What do you think? Were you hoping that the Harlots TV series would be renewed for a fourth season? How do you feel that Hulu had cancelled this TV show, instead?

Terribly upset this was my Favorite show! Why do they cancel any show that shows untypical female lead characters despite being very highly rated? Diet Land was also very highly rated everywhere including rotten tomatoes & was cancelled after the first season . I want to see what happens to Charlotte ?! They can Not allow her to simply Rott!

BEING IT BACK FOR SEASON 4 PLEEEEEASE!!!!!

Please bring Harlots back ASAP! I’ve been watching this show faithfully and it’s absolutely devastating to see it leave just when Lydia and Lucy started working together AND Emily has a brothel all her own now. Come ON! Season 4 was going to be EPIC! Bring it back please

I enjoyed the drama and the girls being very machievieious about getting there way. It is quite exciting to see villains crushing dreams. And it’s nice to see women standing up for themselves.

Just a few hours ago, a tv guide website called TV LINE (if you Google the words “Is harlots canceled” you’ll see their article on this), said its officially been canceled…along with another site called TV SERIES FINALE, posted the same thing an hour ago and you’ll see their blog about this using those same quoted keywords i mentioned earlier. Im sad about this because I feel there’s more that could have went on. Now, I’m not saying that this is why but, ill just make myself feel better by saying the Coronavirus is why they couldn’t film it anymore… Read more »

Really sad the season is being cancelled. It was such a good show but I feel like Hulu didn’t promote it correctly. They kind of left it to be without any promoting. Too bad =(

I’ve been patiently awaiting season 4 of Harlots. Hands down my favorite series! Please let’s get this party started………. I need to find out what my favorite ladies are up to!

You MUST renew Harlots!! It is hands down one of the best shows on right now!! It easily tops Handmaids Tale (in my opinion) but has had NONE of the promoting. Long live Harlots!!

PLEASE, PLEASE renew Harlots for a fourth season. I would love to see it renewed for several more seasons. It would be nice to have more than 8 episodes each season, but beggars can’t be choosers.
There are very few series worth watching anymore, so a series of this caliber deserves another season.

Please renew the Harlots!! I love this series and it’s feisty women

I am obsessed with Harlots too. I have watched the first 3 season’s about 15 times. I can’t believe it does not get huge critics accolades. The acting is stellar. Standouts are Lesley Manville and Jessica Brown Findley. Lydia Quigley is one of the best villainesses EVER on TV. It is no great feat to make you hate a character, but it is a miracle when that character inspires sympathy despite her evil deeds and misanthropic behavior.

Usually I’m not big on watching a lot of tv, but watching Harlots is like reading a good book you just can’t put down.

Please don’t cancel this show! It’s one of the few good shows out there!

I hope it never gets canceled

It did…in fact it was just a few hours ago today that they announced it online saying its ended.