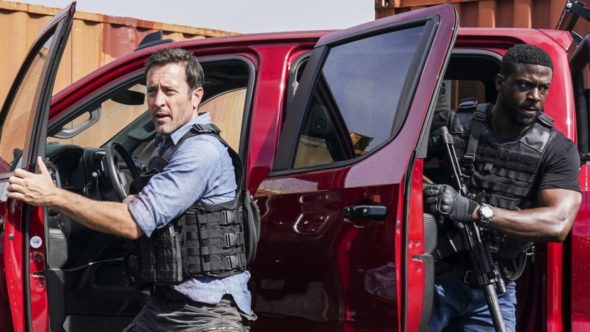 Hawaii Five-0 ended its run on CBS after 10 seasons, and the last scene of the episode was full of emotion. Peter Lenkov revealed why the final moments of the series were so emotional. There were some real tears shed by the cast in those moments.

Per Deadline, Lenkov revealed the following about the end of the CBS series:

“I had told the cast and crew two hours earlier that the decision was made that the show was not coming back. Everything you see there in that scene, including the dog, was so real. You almost had to imagine that the dog sensed it. (laughs) But everything you saw in that goodbye was real tears and genuine affection and emotion for each other.”

Lenkov also feels that the scene was the best scene of Hawaii Five-0 he ever shot. The series did go out on a high note. It had the highest ratings in 27 episodes for the series.

What do you think? Did you enjoy the finale of Hawaii Five-0? Do you want the series to return?

Fast forwarded through them saying goodbye one by one. Predictable and boring. Didn’t find the finale to be anything special. Had no doubt from the week before that Catherine was going to be there in the end. I will miss the show, but the finale wasn’t much more than a business as usual episode.

Yes, it MUST come back with same cast! Never thought this was the last forever! In shock right now! Very sad.

I have same idea.
This series was so awesome. I love it.
I don’t believe this series going forever

I have always enjoyed the, story, and characters. It was done with style and believably, not like the reality stuff. Sorry to see yet another good show go.

yes would love see come back

Definitaley Hawaii 5-0 is one of the best! Watching the scenery was so refreshing each week. The complicity between the group made it special. I’ve seen the original serie when I was a kid and never missed the new one. Why exactly is the serie being put to an end?

This show was so very well written and cast worked so well together WHY did it have to end. You could see the raw emotions of the cast saying their good-byes. I have watched this show from day 1 just as I did the original back when I was a teenager. WHY do the GREAT shows end or cancelled? From the bottom of my heart I send Best Wishes to these actors/actresses, the entire crew, and the writers. Thank you. Please be SAFE during this pandemic. Hold your loved ones close.

Can’t figure out why they cancel good shows with great ratings, but renew the reality ones year after year with nobody players.

I want the show to continue even if the McGarrett is replaced with a different team leader! I refuse to watch anything else in that time slot. Blue Bloods is the only show that I will continue to watch on Friday nights!

I couldn’t stop crying !!! Love the part when he was on the plane and his ex girlfriend sat diwn next u to o him.

Hawaii 50 needs to be returned or the great writers should have a spin-off.

I thought of the same idea . Love all the characters on the show . Need a spin off

I’m so sad this show is ending !!
Please bring it back !!

So sad that this show has ended. The last episode was a tribute to the characters and how much they have become part of our Ohana.

I would love to see it come back with the same people playing in it. It was such a great show.

I really didn’t care for the entire ending of the show. I would have preferred just having them saying good bye to Steve & not showing anything on the airplane. Just let him walk away.

I loved Hawaii 5-0! I would LOVE to see it return! I couldn’t wait for Friday nights to watch the show, and it will be hard when Fall arrives and I won’t have my favorite show to watch. I’m hoping there will be some guest appearances by some of the 5-0 gang on the new Magnum PI!