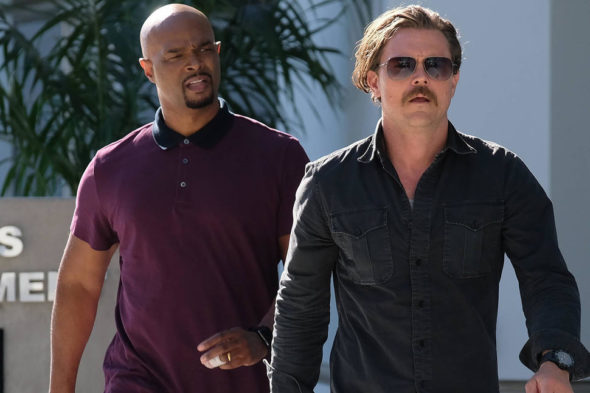 Murtaugh (Damon Wayans) and Riggs (Clayne Crawford) deal with some tough situations on the Lethal Weapon TV show but it seems there’s been some real trouble brewing on the set of the FOX series. Word is that the show may not be renewed for a third season or, if it is renewed, one of the stars could be replaced.

Earlier this week, Deadline reported that “Crawford has had a history of bad behavior on the show, and that he has been disciplined several times over complaints of emotional abuse and creating a hostile environment.”

In a lengthy response, Crawford addressed his behavior:

As you can imagine, yesterday’s headlines were incredibly distressing.

It is true that I have been reprimanded twice during the past two seasons of ‘Lethal Weapon.’ The first reprimand was because I reacted with anger over working conditions that did not feel safe or conducive to good work under the leadership of a guest director and assistant director, who, in turn, were angry at my response. I met with human resources, I apologized for my part of the conflict, and I completed studio appointed therapy in October. I even shared a sizeable portion of my paycheck with one of the parties involved, per the instruction of the studio.

The second reprimand happened just a few weeks ago during the episode I was directing. An actor on set felt unsafe because a piece of shrapnel from an effect hit him. It was an unfortunate event that happened in spite of all precautions and procedures being followed. I take responsibility for the incident, because I was in charge of the set. I absolutely love, respect, and care for my crew and cast and would never intentionally jeopardize so many jobs. Moreover, I love the process of filmmaking and television. I appreciate and respect the work of everyone involved. It takes a village, and I am incredibly sorry if my passion for doing good work has ever made anyone feel less than comfortable on set or feel less than celebrated for their efforts. Furthermore, I apologize to all the crew and cast for any negative attention ‘Lethal Weapon’ is receiving because of these incidents.

I take great pride in treating everyone in life with dignity and kindness. I am very grateful for my job, and I work extremely hard at it. I have a responsibility to do good work for my coworkers, my family, and my home state, and most especially for the fans. I hope they will stick with me and stick with the show.

Deadline followed up their initial report with some more details about the incidents that Crawford mentioned in his post.

In the case of the first reprimand, the director in question quit before finishing his second episode, allegedly due to Crawford’s behavior.

In the case of the second reprimand, the actor that was injured by being hit with shrapnel is believed to have been Wayans. Wayans was sent home for the day and, when he returned the next day, Wayans set limitations about what he would do, citing safety concerns. This reportedly led to an argument “with Crawford using strong words to tell Wayans how he felt about him. I hear the issue went all the way to the high ranks of the studio, Warner Bros. TV. And while Crawford ultimately completed the episode, I hear the relationship between the two stars suffered irreparable damage.” Word is that they are hardly speaking to one another and Deadline reports that “the issue has escalated to a point where other actors as well as crew on Lethal Weapon would feel uncomfortable being on set with [Crawford]”.

Can the difficulties be worked out? One solution being explored is to renew the series but replace Crawford’s character and give Wayans a new partner, possibly a female one. According to Deadline, cancelling the series could cost Warner Bros TV a lot in international sales. It’s unclear if they could try to sell the series to another domestic outlet if FOX cancels it.

The network execs reportedly have until June 30th to decide if they want to renew Lethal Weapon for a third season.

If Crawford does exit the series, killing Riggs would be keeping with showrunner Matt Miller’s eventual plan for the series. In October, TV Guide reported:

“I think it’s a little bit of a Sisyphus thing,” Miller said of Riggs’ battle with his own inner demons. “He’s going to climb and push the boulder up, and it’s always going to kind of roll back… I don’t know how long this show will last, but I think he should probably die at some point. Not soon, but at some point, that would be a way to say goodbye to the show.”

What do you think? Do you think Crawford should be replaced? Would you watch season three without him? Should Lethal Weapon be cancelled if things can’t be worked out?

5/8/18 update: Crawford has been fired from Lethal Weapon. Details here.

We love the show, but we will not watch it without Clayne Crawford in it. He makes the show.

No Crawford, No show.

There is no Lethal Weapon without Clayne Crawford ! Dump it !!!

I won’t watch the new show but not because Crawford isn’t there. Because the show is poorly run if you can’t settle down one of two, of the main characters, let it get so far out of hand that the other main character basically decides what is going to be done, and then a new “sidekick” is hired to replace…who? I give up. To hell with this show, I’ll watch something better run where inmates don’t run the asylum.

I love this show. It won’t be the same without Crawford. He makes the show. If he doesn’t come back I won’t be watching!

Nope I will no longer watch. Clayne apologized for his behavior so the crew and cast of the show should have accepted it. Now they just seem like spoiled hollywood elites!

Will not watch without Clayne! Boo Fox!

No Clayne I also shall not watch!It was such a great show & my husband and I enjoyed so very much! I surely do hope they can “mend their fences” and CARRY ON!

NO Clayne NO Watch

Clayne Crawford is Lethal Weapon. No way will I watch without him.

I love the chemistry between Damon and Claude! I will not watch without them together. You made a big mistake fox!!

We love Crawford, We will not watch anymore if it comes back without him. Please continue as before.