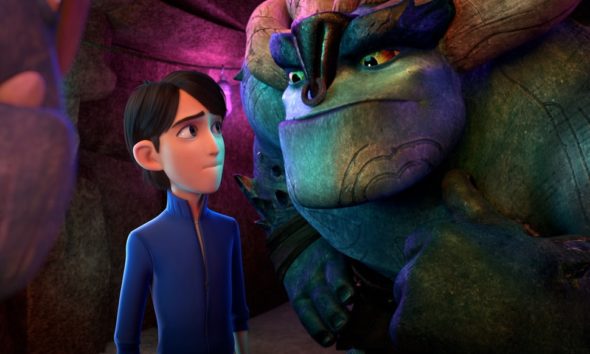 Some bittersweet news for Trollhunters fans. According to The Hollywood Reporter, the Netflix TV show will end after season three.

Per THR, season three of Trollhunters will feature the voices of Tatiana Maslany, Diego Luna, and Emile Hirsch, who will take over the role of Jim Lake Jr (originally voiced by the late Anton Yelchin).

The third and final season of Trollhunters premieres on Netflix on May 25th.

What do you think? Have you seen Trollhunters? Are you excited for season three?

The show is great there has to be more.

It’s brilliantly written. I’m so sad there are no more to come.

My grandson is so sad, he is 15ys old and is totally enthralled with theeuTrollhunters series, he thought i had to be teasing him that the series was over. When i showed him the google search results, a sadness came over him.. i can only find season 1 on dvd to get him for christmas and he is afraid season 2 and 3 may never become available for him. i did find a calendar for 2019 at walmart but he wants the whole series and the story to continue. we watched it as a family me his sister and him.… Read more »

Our whole household loves this series, including our 2 granddaughters. We are so hoping they are not really going to cancel this. It will be sad to see it go. We have had hours of fun watching it together.

Hey Everyone, we also are very disappointed the series is ending, loved by the young and the young at heart alike. But it was a trilogy and it’s not completely over! Look for 3 Below, a new show on netflix coming later this year that is really a continuation right in Arcadia. I just hope it will be good as the original 🙂

I and my sister really love the trollhunters <3. It was great and I want to appear 4 season… !
Please… do more season !

MY DAUGHTER AND I LOVE THE TROLLHUNTERS ON NETFLIX, BUT WHY ARE YOU CANCELLING IT AFTER THE 3RD SEASON?

If FOX cancels this show and does not bring Clayne back it is the biggest mistake they will ever have made. The show is the best series on any network. Clayne plays the role of Riggs like no one else can. I will never watch any program on FOX again if he does not return or if that series is cancelled

Umm… do ya have the right show??

yes looking forward to it!