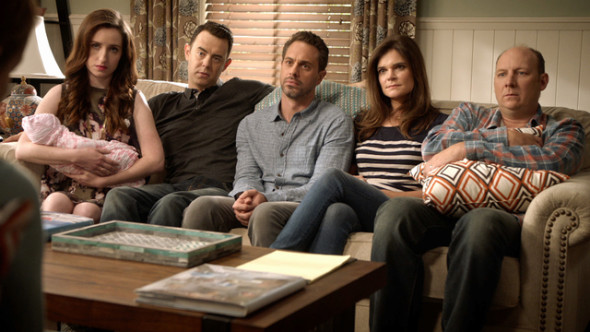 CBS has had great success in the ratings with several of their sitcoms. The Big Bang Theory continues to be one of the highest-rated shows on television. However, the network doesn’t seem to have much sympathy for comedies that can’t pull their weight. How is Life in Pieces performing? Will it be cancelled or renewed for a second season?

The series debuted on September 21st and attracted a very healthy 2.63 rating in the 18-49 demographic with 11.28 million viewers. Episode two dropped more than 22%, to a 1.94 in the demo with 8.71 million. It continued to air on Monday nights for a few more weeks and then moved to its permanent timeslot on Thursdays at 8:30pm.

The series has continued to be a steady performer for CBS and is averaging a 2.03 in the demo with 8.83 million viewers. Life in Pieces has likely benefited quite a bit by having high-rated The Big Bang Theory as a lead-in. However, it should be noted that this sitcom holds up pretty well in the ratings even when preceded by a Big Bang Theory rerun.

CBS head Les Moonves recently said that he expects five of the network’s freshman shows for second seasons. Many of the network’s sitcoms have been around for quite awhile so the CBS execs knows they need to nurture new series. While Life in Pieces wasn’t one of the 11 CBS shows that were renewed earlier this month, I expect it to be renewed for a second season.

But, what do you think? Do you like the Life in Pieces TV show on CBS? Do you think it should be cancelled or renewed for a second season?

I love this show. Thursday night my night with Big Bang then life in pieces. It’s so funny. Please don’t cancel it.

Love, love, love this show!! All the actors do a fantastic job!! Hilarious!! And if you don’t think it is…don’t watch it!

One of the funniest new shows I have seen in a long time. Really hope it is back next year! If you don’t like this show you have no sense of humor.

Great show…clever, funny, and it’s easy to like all the characters. It would be a shame if it’s not renewed.

I love Life In Pieces. There is plenty of material to build a second season on, and I can’t wait! ( …and I don’t watch BBT! )

Renew show. It is funny and very clever. The actors are all very talented.

Great show with an original clever concept. Well-written, both funny and poignant. RENEW!

Best show on TV right now. Better than BBT which has lost me now. They would be stupid not to renew it!

You’re obviously joking. Nothing offensive here. If you find it so, change the channel

If you’re so offended by a primetime network TV sitcom that you’re going online asking for it to be cancelled, then maybe it’s time to step away from the TV.

This is the only TV show we watch consistently. The writing is intelligent and sharp. No other sit-com can compare.

Please keep this show on the air. It’s one of three shows our family looks forward to watching every week. Love Love Love the show!

Gah what is wrong with people. This show is NOT FUNNY. Please please cancel and find a show that is actually funny!! The talent of Colin Hanks and Zoe Lister Jones is wasted on this crap. And please get Angeliqe Cabral off my television she is TERRIBLE. Cancel cancel cancel.

Can you maybe back up your attacks with some facts??

I don’t care about the show either way, but this isn’t a science project. It’s a matter of opinion.

I love Life in Pieces. This is a great show with a smart, funny cast. I hope to see it come back in the fall.