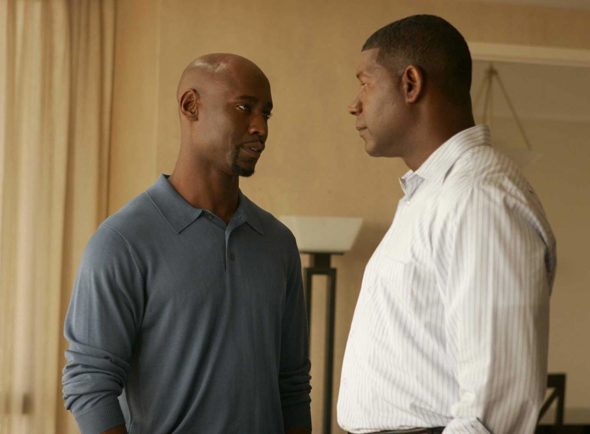 Dennis Haybert is coming to Lucifer for its fifth and final season. Entertainment Weekly reported that the actor will have an important role to play. He is playing God, the father of Lucifer and Amenadiel, who are played by Tom Ellis and D.B. Woodside.

This is not the first time Woodside and Haybert have worked together. The pair appeared as brothers on 24. Woodside was actually instrumental in getting the actor cast on the Netflix series, according to one of the series’ showrunners, Joe Henderson. He wasn’t even sure if Haybert would be interested in the Lucifer role. He was the only actor Henderson wanted for the role though.

However, Haybert was immediately on board. The actor said the following:

“Every time I see D.B., there’s always this fondness and this connection…We worked on a show that was arguably one of the best shows ever produced in television, so you’re going to have a kind of camaraderie. I don’t know how I went from brothers to father. We’re celestial. We can do that.”

What do you think? Are you excited to see Dennis Haybert on Lucifer? Do you plan to watch the final season of the series?

Love this show. Sorry this is the final season.

I got Netflix because I love this show and it is better than it was on the other. So pleased with this change. Excited to see season 5. And maybe another? Finally a station that listens.

Would like very much to see Lucifer and all the great cast, but I will not pay Netflix to see it. Wish the cast and Netflix the best.

loved this show from the very first episode,sad its going to end, but happy for the 2 seasons we got after it was cancelled from network tv MAYBE we can see “lucy” do a few more cameos on the CW again on the DC superhero shows .

I am really looking forward to watching the final season and finally we will get to see the “Father” of Lucifer.

So hooked on this series. wish it would go on for 3 more seasons.

Im looking forward to the new season, don’t like the PC god choice.

why do very good shows get dumped I guess I’ll never know or understand there logic. I’m still hoping that season 5 of Lucifer will not stop at season 5. Please continue to more than 5 seasons. Does anyone agree with me?

I agree with u they should do more seasons

Here’s where I”m going to play devil’s advocate. (no pun intended) We almost lost the show for good when FOX stupidly cancelled it. Thank God (again, no pun intended) Netflix rescued it! I’d love way more than 5 seasons but I’m truly thankful that Netflix gave us 2 more seasons! At least we’re going to get closure which we wouldn’t have had if Netflix hadn’t scooped it up! (By no means am I arguing with your comment, George…I would LOVE more than 5 seasons…but after nearly losing it for good, I’m just relieved we got 2 more seasons and closure… Read more »

George, I get what you’re saying, but why does the race of a being who doesn’t exist in flesh matter? Lucifer and Amenadiel are from the same two “parents”. These beings don’t actually look as they do on Earth. Remember Charlotte/The Goddess? She borrowed a body. I’m guessing that’s what God did as well. Personally I never thought God was corporeal, so it makes sense to me.

sad its going...again
Reply to  George