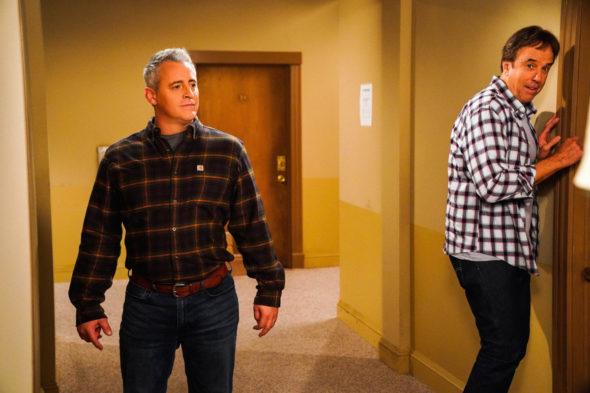 Is Adam’s plan still on track? Is the Man with a Plan TV show cancelled or renewed for a fourth season on CBS? The television vulture is watching all the latest TV cancellation and renewal news, so this page is the place to track the status of Man with a Plan, season four. Bookmark it, or subscribe for the latest updates. Remember, the television vulture is watching your shows. Are you?

A CBS family sitcom, Man with a Plan stars Matt LeBlanc as an old-school contractor named Adam, who is trying to adapt to the demands of modern family life. The cast also includes Liza Snyder, Kevin Nealon, Stacy Keach, Grace Kaufman, Matthew McCann, Hala Finley, Matt Cook, and Kali Rocha. Now Adam and his wife, Andi (Snyder), are running a house-flipping business with his brother, Don (Nealon) and friend, Lowell (Cook), with a surplus of input from his other family and friends.

The third season of Man with a Plan averaged a 0.87 rating in the 18-49 demographic and 5.33 million viewers. Compared to season two, that’s down by 12% in the demo and down by 8% in viewership. Find out how Man with a Plan stacks up against other CBS TV shows.

Will CBS will cancel or renew Man with a Plan for season four? The ratings aren’t very good but I suspect the studio would like to get more episodes for syndication. Right now, I believe it will be renewed. I’ll update this page with breaking developments. Subscribe for free alerts about Man with a Plan cancellation or renewal news.

5/10/2019 Status Update: Man with a Plan has been renewed for season four. Details here.

What do you think? Are you happy CBS renewed its Man with a Plan TV show for season four? How would you feel if they had cancelled it, instead?

My husband and I love this show. It is so funny Everyone makes this show!!!!!

I love this show. I hope it gets renewed for another season..

My wife and I love the show especially Matt Leblanc

I sure hope the network renews Matt’s show. I look forward to Matt and his TV family every week.

Love the show. Would be very unhappy if it were to be canceled.

My husband and I both love this show! It is our favorite show these days. We laugh our heads off during every episode. We have been looking for it to start up again. We keep checking the schedules but can’t find a day or time listed. Bring on Season 4!!!!

I would have been very upset if season four of man

YES!!!!BRING MAN WITH A PLAN BACK!!! THE SHOW IS HILARIOUS!!

I absolutely love Man With a Plan, It Is So Funny and The Cast Work Great Together. I Look Forward To Seeing This Show Everyday. It Woukd Be a Shame To Cancel This Show. In Today World, We Need a lot Of Laughter, Everyone Is So Stress Out, Worrying About This Or That. So It Is Really Nice That Once Week We Can Just Sit Back and Relax and Laugh a Little. Please Don’t Cancel This Show.

I agree! The show is hilarious without using shock value sex. I am no prude but I have had my fill of sophomoric writing. Life is not always about sex and sexual situations. MWAP has great writers who find comedy in every day situations.

I agree. It’s like the old comedies when they did find comedy in everyday situations

Man With A Plan is a Terrific Show with Great Writers and a Great Cast. To cancel this show would be a Horrible thing to do. Trust me…more people than your “Stats”watch this show! Leaving it on CBS is the right move.

I LOVE Man with A Plan! It is funny and the cast work so well together. RENEW RENEW,,,,,,,,

Love it!!! Please keep it

I Love this show. Glad it’s finally back ob.