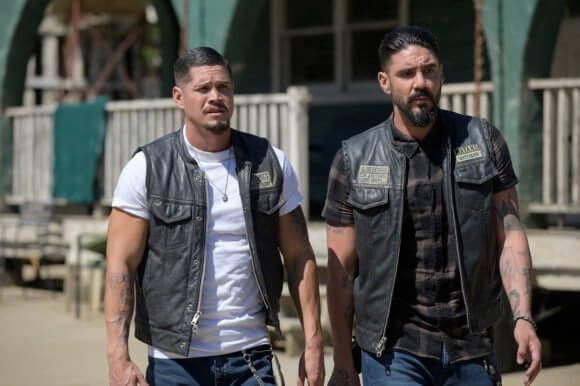 Mayans MC will wrap its second season tonight on FX, and fans have some good news about the future of the series ahead of the end of season two. FX has renewed the drama for a third season, which will air in 2020.

This news comes just weeks after the cable network fired Kurt Sutter, the man behind the popular series. Elgin James, the series co-creator, will be the showrunner for season three.

As for ratings, this series averages just slightly over one million viewers weekly. That is initial numbers reported by Nielsen. Mayans MC does even better when you add in other measurements.

FX revealed more about the renewal of the series in a press release. Check that out below.

“Mayans M.C. has been renewed for a third season, building on the strength of its current second season, it was announced today by Nick Grad, President, Original Programming, FX Entertainment. It was additionally announced that Co-Creator and Executive Producer Elgin James will serve as showrunner for the series’ third season, which is scheduled to return to FX in the fall of 2020.

“We’re happy to continue telling the story of Mayans M.C. with our partners at Fox 21 and excited that Elgin James has earned the opportunity to become the series’ showrunner,” said Grad. “Kurt Sutter identified and chose Elgin as his partner on the show from the outset and Elgin has been instrumental to the success of the series, leveraging his experience and creative vision to make Mayans M.C. with this incredible cast, crew and creative team.”

“Keeping this vibrant series strong is a huge priority to everyone at Fox 21 Television Studios, FX Productions and of course FX, which has been a spectacular home and platform for both Mayans M.C. and Sons before it,” commented Fox 21 TVS President Bert Salke.

After finishing 2018 as cable’s most-watched new series for the year in Adults 18-49, Mayans M.C. returned strong for its second season, currently ranking #6 in Adults 18-49 among the 172 cable scripted series in 2019 and in the Top 10 in all other key demos (Live+7). Across all linear and non-linear platforms, Mayans M.C. is averaging 4.6 million Total Viewers per episode.

Created by Kurt Sutter and Elgin James, Mayans M.C. is the next chapter in the award-winning Sons of Anarchy saga. Set in a post-Jax Teller world, Ezekiel “EZ” Reyes (JD Pardo) is a prospect in the Mayans M.C. charter on the Cali/Mexi border. Once the golden boy with the American Dream in his grasp, EZ is trying to reconcile with his brother “Angel” (Clayton Cardenas) while searching for the truth behind their mother’s death. Meanwhile, their father “Felipe” (Edward James Olmos) is struggling to lead his sons down a righteous path. The series also stars Sarah Bolger, Michael Irby, Carla Baratta, Antonio Jaramillo, Raoul Max Trujillo, Richard Cabral, Danny Pino and Emilio Rivera. Mayans M.C. is produced by Fox 21 Television Studios and FX Productions.”

What do you think? Are you a fan of Mayans MC? Do you plan to check out season three when the series returns next year?

Yes, Boyfriend and I will definitely watch season 3 and hopefully season 4!!!!!
It’s a really good biker show, almost as good as, Sons!!!
The longer it runs, it will outweigh the Sons!!
KEEP UP THE GOOD WORK!! Hi

My husband and I never miss an episode. when will season 3 be aired

I like this show a lot except both my husband and I have sometimes understanding what the Mayans are talking about at their conference table. But it’s a really great show.

I LOVE this show and it truly weighed on me that it was one of the last of the shows to be renewed. I wish the season would be longer if you are going to make us wait a year to see it again!

I love Mayans and am so happy it was renewed. I hope it runs for several more years.

I like mayans and will continue watching, but it will never be as great as SONS.

It is BETTER than the sons! It needs a longer season though. THEN it will be even better!

I would like to say that Mayans MC is so well done that it even surpasses Sons of Anarchy which I watched to its entirety. The only thing I don’t like is Potter and I wish he’d get his for being such a slimeball. The series is number one on my list and should be receiving Awards right and left the actors the chemistry between them is exceptionally well done

Great show, and I like Michael Irby as an actor. But it’s tough to buy him as this leader because he’s so short. Everyone else is has been tall…Jax, Clay, etc.

It’s not the sons AND Jax was smaller! Just as short but skinnier!

We enjoy watching the show, because we too are serious Harley Davidson motorcyclists.

I love Mayans mc and can’t wait for the season finale and next season. but I don’t like the way kurt sutter was treated he said he was stepping away from the show next season way not let him leave and keep his good name intact I don’t believe all the bs they said about him where is the proof?. hope he moves on to bigger and better things

Do not agree…. he was difficult to work with on the set of the Sons! This is not a first for his bad behavior and how he treated others.

I love the show I am big fan of both S.O.A and Mayans MC… I hope the shows continue with legacy and become back more powerful then ever… and see more of the sons on the show

I love the Mayans M.C. The cast and crew are great. Can’t wait to see the finale. But more excited about getting Season 3.